This followed a team up in ‘Avengers: Infinity War’ between Black Widow (Scarlett Johansson), Okoye, and Wanda against Proxima Midnight (Carrie Coon).  Fans love the women of the Marvel Universe, but so far, only Captain Marvel has had her own movie, while Wasp co-starred in ‘Ant-Man and the Wasp’.

Screenwriters Christopher Markus and Stephen McFeely spoke to Variety about the iconic “A-Force” moment  in ‘Endgame’, including the impact it had on the women working on the film:

Markus: “Marvel fans, increasingly, with every movie, [have] gotten these great female characters.  Some people can call it pandering but it’s also like we have tons of shots of all men. Why not have a shot of all women and they’re so cool? It just seemed like ‘Let’s celebrate it!'”

McFeely: “I remember on the day we shot that, every woman on the crew and in the offices came down and were sort of milling about behind the cameras.  That was, perhaps, the most moving part of it for me, how important it was for everybody to see it.” 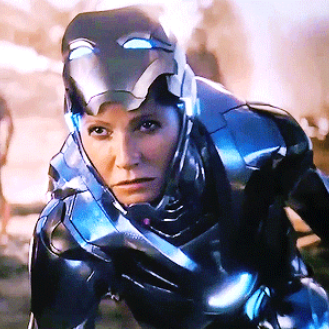 One highlight within a scene that was already a highlight, was seeing Pepper Potts suit up as Rescue and kick butt alongside Iron Man and the other heroes, male and female.  Pepper, along with the likes of Jaimie Alexander’s Sif, Hayley Atwell’s Agent Peggy Carter, Angela Bassett’s Queen Ramonda, Rachel McAdams’ Doctor Christine Palmer, Lupita Nyong’o’s Nakia, Natalie Portman’s Jane Foster, Cobie Smulder’s Maria Hill, Tilda Swinton’s Ancient One, Marisa Tomei’s May Parker, and Emily VanCamp’s Sharon Carter established themselves as anything but damsels in distress and some helped set the stage for Captain Marvel and the other superwomen to stand shoulder-to-shoulder with the male heroes of the MCU.

The ‘Black Widow’ solo film is expected to be released next year, and a sequel to ‘Captain Marvel’ is a given, and there is talk of a third ‘Ant-Man’ featuring the Wasp.

Reportedly, Thompson, flanked by the other female stars, walked up to Kevin Feige and demanded an all-female team-up movie, to which he agreed.  Unfortunately, there hasn’t been any further news on that happening, so for now, at least, we can enjoy this brief snippet from ‘Endgame’.

You can see a brief clip from it in the newest ‘Avengers: Endgame’ TV spot below:

James Mangold Is “Thrilled” About The Oscar Nod For ‘Logan’