For eight episodes now, much of what’s led to the events in Locke & Key has been shrouded in mystery. Sure, there were hints of what transpired but we never had the complete picture of what happened between Rendell and his core of friends or the origins of Dodge/Lucas and her true endgame. “Echoes” answers these questions, using Ellie as the story accelerant who, after months of capitulating to the demands of the thing wearing Lucas’s face and giving it a place to stay.

Though her fear for Rufus is understandable, she resolves that letting Dodge win would effectively make her and Rufus expendable. “Echoes” introduces us to more keys as well as the truth of what really happened to Lucas all those years ago. It also gives an understanding to Mark’s self-immolation after hearing of Rendell’s death (though I’d argue that going off-grid would have been just as effective). And when I earlier asserted that Sam (and Dodge) jump-started the events to our story, it becomes clear that Ellie was the unwitting arbiter of all the present-day calamity.

Though Rendell and the others started it by opening the Omega door, the events of the last few months fall squarely on Ellie’s shoulders when she used the Echo Key to resurrect Lucas — though, to her horror, she brings back the demon that possessed him during the Omega door opening. From there, the Dodge echo manipulated Bode to give her the Anywhere Key, thus eliminating the force tethering her to the well house.  Though Ellie deserves a lot of blame, she also should be credited for pushing past her fear.

But her story also helps give context to the memories of Rendell that Tyler was so quick to judge. It’s a reminder that one can’t just look at a thing and gain a complete understanding of it without first examining the underlying details because, as they say (or should, at least), context is everything. In the end, it seems that, with Rufus’s help, Ellie turns over Dodge’s cadre of keys to the Lockes and giving them a distinct advantage over their supernatural foe. Now all she needs to do is return home and pick up the dreaded Crown of Shadows. Unfortunately, this is where “Echoes” falls on its face. 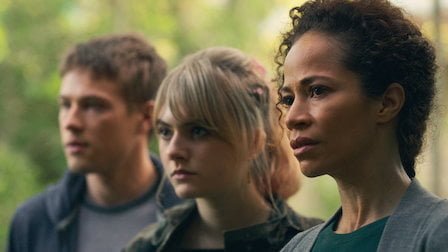 In storytelling, there’s always some level of convenience on how events unfold in order to further the plot. Yet, there are ways of doing this that don’t interfere with the strictures created by the story’s world or strain the levels of credulity and sense. It’s bad enough that Ellie leaves the Crown of Shadows (one that allows its wearer to call forth and control shadows) at home while taking the other keys to the Lockes but then to take the Crown of Shadows Key with her when she and Rufus return home is such an eye-rollingly insane plot point that it drags down much of the goodwill “Echoes” created. It’s bad enough that such a stupid turn of events happens at all, but it’s made worse as it brings “Echoes” to a close, effectively ensuring that’s the last thing we’ll remember about the episode.

Thankfully, “Crown of Shadows” does its best to make up for the preceding episode’s folly, as Dodge makes a final push for the Omega Key by leading her army of shadows into Keyhouse. For a series steeped in magic and demons, Locke & Key has been lacking in its creep factor. Dodge’s assault on Keyhouse is by far the best rendition of the ominous nature of her origins and captures the eeriness of Locke & Key’s horror elements without sacrificing its already-established tone. While the scene is too short for my liking, it successfully adds a tension of uncertainty as Bode, Tyler, and Kinsey fight to hold back the shadow army.

Bode is the biggest surprise here and it was a long time coming (relatively speaking). Cast aside these past few episodes, “Echoes” and “Crown of Shadows” re-establishes his importance to the overarching narrative. It starts with him calling out Tyler and Kinsey for trying to protect him, an understandable sentiment that never pans out in supernatural dramas (and one that Tyler thankfully shucks when choosing to involve Jackie, Scot, and their other peers in on what’s happening). The teens show Bode Duncan’s memories of Rendell killing Lucas which, in turn gives them more information on Lucas himself and Ellie’s definitive involvement. Then, during the shadow war, Bode uses a bit of ingenuity, attaching the Fire Key (technically ‘the Matchstick Key’) to the end of his lightsaber toy to fight against the shadows. It’s effective too and leads the apparent victory over Dodge. With the help of their friends, they carry Dodge’s unconscious body to the Omega door and banish the demon back into the realm on the other side, finally defeating their enemy and keeping the family safe.

They should have known it was too easy.

In the aftermath, Ellie is nowhere to be found. It doesn’t take long for us to realize why; before her assault on Keyhouse, Dodge used the Identity Key to transform Ellie into her doppleganger, eventually planting the unconscious victim in the foyer for the Lockes to find. What’s even worse is that Dodge has, for these past few months, also been masquerading as Gabe in a wonderful Sixth Sense-like twist that, while adds even more intrigue into a potential Season Two, is also ruined by a poor decision to spell everything out to viewers in painfully obvious detail.

It’s a fitting end though, in both the positive and negative and while the Locke children believe the threat to be eliminated, the truth is far more complex and insidious. Instead of knowing who to look out for, the threat now lies comfortably in their midst, watching and waiting for the opportunity to arise.

Maya Angelou once said, “when someone shows you who they are, believe them the first time”. It’s a statement as true in life as it is in the spheres of fiction and entertainment. From day one, Locke & Key has demonstrated copious amounts of potential which, early on, was held back from what I thought to be the show’s focus on drawing out the mystery. But the signs were there that it was more than that and I ignored them, holding out hope that the vast potential would be realized. Instead, “Echoes” and “Crown of Shadows” only reinforced what earlier episodes had already given us: strong protagonists, a fascinating villain, head-scratching narrative decisions/unnecessary storylines (my exclusion of anything relating to Nina in this review was not accidental), and the propensity to overexplain.

This last point was particularly detrimental to the finale, one whose twist, while not wholly original, was woven into the story extremely well. Yet, when the time came to explain it, the writers decided that viewers could not be trusted to connect the dots and relegated to giving us a minute and a half breakdown of Gabe/Lucas/Dodge pulling the wool over everyone’s eyes. This was a terrible decision that stole the agency and power from the revelation. Despite some insufferably poor decisions on the show’s creators, Locke & Key was a fun ride that leaves us with plenty of questions. What dimension lies on the other side of the Omega door and what horrors will Ellie suffer while trapped there? Where has Kinsey’s fear run off to and will she try to corral that personification of terror or let it run loose in the wilds? Now that Eden is infected, what will her and Gabe’s new plan be? Will we see more of the Dodge persona (yes, please) and what other keys remain yet to be discovered?

Even with Season One’s uneven narrative and at times poor decisions, Locke & Key harbors a ton of promise that, should a second season come to pass, still has plenty of source material to explore (even if they did an unnecessary speed run through a helluva lot of it) but can also take an original direction, especially considering Joe Hill’s behind-the-scenes involvement with the production. I am not one to lambast a show based on a dicey first season (many of the best have suffered similar issues of imbalance during their freshmen campaigns), so long as the splotches are buffed out the next go-round. I want to see more Locke & Key and, perhaps selfishly, need answers to some of the questions the series has left us to entertain.