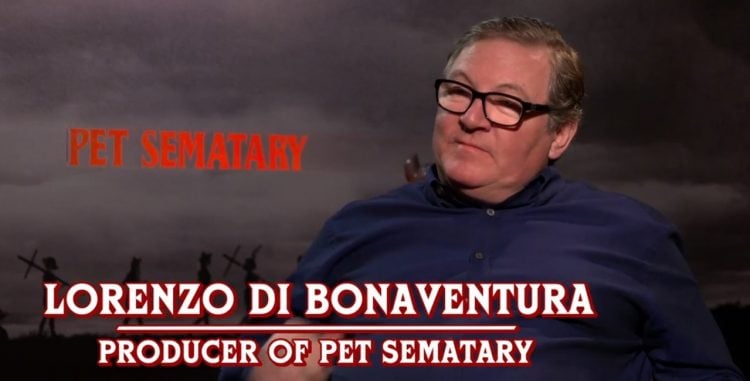 Producer Lorenzo di Bonaventura says that ‘Pet Sematary’ is more likely to get a prequel than a sequel.  For starters, the original storyline doesn’t leave a lot of room for further development.  But producer Lorenzo di Bonaventura thinks there may still be more story to tell in the town of Ludlow, Maine, even if he’s not thinking about that just yet.  As he stated during an interview with The Losers’ Club, “I generally don’t start thinking about [sequels] until they’re a success.”

But should ‘Pet Sematary’ prove to be a success at the box office, di Bonaventure says:

“I think if there’s anything here, there’s a prequel. I think if you look at the book, we didn’t cover all that stuff that happens before the Creed family moves in.

“So, I think there’s a movie there, and I think I’d be particularly interested in doing that, because, again, it’s the source material and you are going toward something that also has a lot of crazy, creepy feelings about it.”

Losers’ Club host Dan Caffrey embellished, that the character Jud Crandall (played by Lohn Lithgow in this film) conveys a number of tales about the history of Ludlow:

“From Timmy Batterman to the buried ox to Jud’s own dog to the elusive Wendigo lurking in the woods, there is admittedly a wealth of source material, as di Bonaventura suggests, to mine. Whether or not it makes for an intriguing overall narrative remains to be seen.” It appears that not as many of these local legends play a part in this cinematic take on the Stephen King novel, but they were included in Mary Lambert’s successful 1989 adaptation.  It was decided that a sequel was in order for that picture, but ‘Pet Sematary Two’ also directed by Lambert, starring Edward Furlong, Anthony Edwards, and Clancy Brown was a dismal failure that got poor reviews.

While Lambert’s first ‘Pet Sematary’ is considered a classic, this new remake, co-directed by Kevin Kölsch and Dennis Widmyer is getting rave reviews following its debut at SXSW a couple of weeks ago.  It currently has an excellent 91% ranking on Rotten Tomatoes.

Fans will get a chance to judge for themselves when ‘Pet Sematary’ opens on April 5.