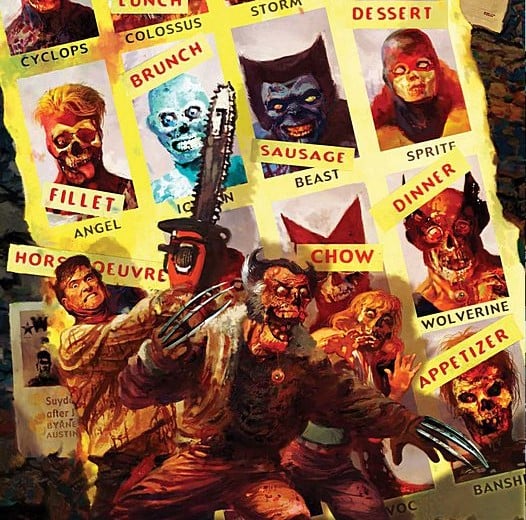 The Comic Archive, in conjunction with my Throwback Thursday column, has been “all in” on Marvel Zombies in the past few weeks, with my recaps of the original Marvel Zombies mini-series, the sequel follow-up mini-series, and “Marvel Zombies Return.” Just when you thought the “Marvel Zombies” series couldn’t get any more entertaining or self-referential, BOOM – Marvel went and pulled out a cross-company crossover series with Dynamite Entertainment’s “Army of Darkness” series that features everyone’s favorite groovy undead killer, Ashley “Ash” Williams.

(Quick side note: Dynamite couldn’t secure the rights to “Evil Dead” as a title for their comic series, but through a legal loophole with the movie studios, they were able to use the “Army of Darkness” title of the third “Evil Dead” film without legal repercussion from those who owned the “Evil Dead” namesake.)

Now, I have read (and own) many of the non-“MZ” Army of Darkness graphic novels that Dynamite has produced, and to be perfectly honest, their writers clearly “get” Ash. They seem to understand what kind of character he is – the irreverent, brash, too-cocky-for-his-own-good-but-always-lucky-enough-to-get-away-with-it type of witty jokester that most zombie fans have come to know and love. They certainly don’t shy away from writing him as exactly this type of character, and I was a little wary of how well this type of character was going to be able to mesh with the more “classic superhero” archetypes of the Marvel Universe.

Fortunately, becoming undead really seems to have brought out the senses of humor of the Marvel superheroes, so Ash’s wisecracks and antics felt oddly at home in this story. It should be noted here that the writing credits of this story don’t go to “MZ” and “MZ2” writer Robert Kirkman but instead to in-house Marvel writer John Layman. “MZ vs. AoD” takes place just before the main storyline presented in the first “Marvel Zombies” mini-series, essentially running concurrently with parts of the “Dead Days” story. Ash, in his never-ending battle against the Deadites and the pesky Necronomicon, is sent to the parallel universe that is about to be taken over by the zombie virus. Finding himself very quickly in the thick of things with normal people and superheroes alike, Ash does what Ash does best: kicks ass, takes names, and asks the ladies for some sugar, not necessarily in that order. From a real-life chronological release standpoint, this series was released immediately following “MZ” and before “MZ2.”

In my opinion, Layman did a great job of not only capturing the sometimes-haphazard and always-entertaining feel of the “Evil Dead” world that Ash inhabits, but also staying consistent with the “feel” of a story that the reader can realistically see Marvel superheroes being a part of. As I read Ash’s dialogue in my head, I could easily hear Bruce Campbell saying these lines out loud, and that sort of “entertainment continuity” contributes heavily to the reader’s ability to enjoy this story. Throw in random-yet-hilarious appearances by a whole new slew of Marvel characters we haven’t seen in this series before, running the gamut from The Punisher to Howard the Duck, and you’ve got one good time on your hands here.

Even though readers are likely now used to seeing these Marvel characters in the zombie stories, the tale overall still feels very engaging and exciting. The addition of Ash and the Necronomicon help bolster the score here, and as mentioned above, the addition of previously-unseen Marvel characters helps to give this series a little bit of a “fresher” feel. As always with stories like this, a question of “realism,” relatively speaking, becomes a concern.  What questions there are in this area are smoothed over by the fact that you’re probably having too much fun reading the series to seriously question the minor plot holes that pop up from time to time. Plus, even though Ash may be a slightly unbelievable character in “real life,” the fact that he remains the same type of character here as he is in the movies lends itself to the “continuity” portion of the realism of the book.

Sean Phillips teams up with a few other artists to once again provide a very good-looking zombie book for us. The amount of visual carnage is still significantly above-average for a Marvel comic book, and the characters are well-drawn and easily recognizable, especially Ash (I’ve always felt that it’s hard to consistently capture the physicality of such an iconic real-life person like Bruce Campbell, but the artists do a good job here). The story moves along fairly quickly with a couple of groan-inducing moments of “convenient escapes” here and there, but on the whole, it’s a very tight story.

The second solid entry into the “Marvel Zombies” realm, “Marvel Zombies vs. Army of Darkness” should easily have something to offer Marvel fans, Evil Dead fans, and most general zombie fans. If you own and “Evil Dead” movie and any superhero comic book at all, this series should be right up your alley.

Got a comic, character, or story arc that you’d like to see covered by the Comic Archive?  Feel free to list it in the comments below or send your recommendation directly to me at tony@tonyschaab.com – see you in the funny papers!

TV Recap: ‘The Walking Dead: Coda’ (or ‘Another One Bites the Dust’)