Familial legacy and the correcting of past sins factor heavily this week, as events kick off with a physical of Abe that touches briefly upon his time at Auschwitz, and the lack of knowledge about his parents.  This Nazi connection is furthered when an art dealer, by the name of Karl Haas turns up dead, with a swastika imprinted in his skull by the murder weapon.  Henry uncovers a priceless statue thought lost and identifies it as said weapon.  This knowledge makes him further able to deduce that everything in Karl’s studio is stolen Nazi treasure. 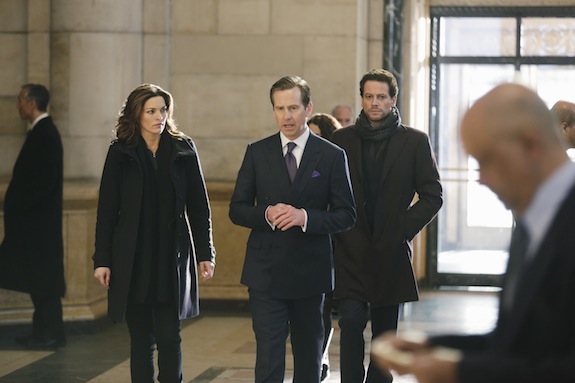 A quick look into Haas’ lineage reveals his father was a high ranking officer in Hitler’s regime, and likely smuggled hundreds of valuable works of art into America following World War II.  An interview of Karl’s son, Erik, turns up little other than a deceleration they were not close and a denial of knowledge about his father’s activities as well as the dark family history.

A recently serviced watch found in Karl’s possession provides a lead, which in turn, alters Jo and Henry’s perception of Karl’s actions…  The owner of the shop had given Karl the antique timepiece because Haas had returned a long lost family painting, free of charge, and without strings of any sort.

Back at Abe’s gallery, Adam arrives with a silver tray in hand, his identity unbeknownst to Abe.  After claiming a connection to Abe’s past, Adam departs under the pretext of having Henry give a quote to the value of the tray.  This particular antique happens to have a tainted history of its own, as it belonged to Henry’s father and brings about a flashback in which he recalls discovering his father’s involvement in the slave trade.  This created a huge gap between them and remains a mistake Henry strives to make amends for even now.

Detective Martinez discovers a connection between a local bank and Karl Haas, where they find a vault filled with hundreds of lost works.  Of course, the manger, Julian Glausser, makes off with the vaults contents the very next day.  But it isn’t long before his mutilated corpse is found in a cargo container with the numerous works of art undisturbed.

A piece of the killer’s skin is found under Julian’s ring, and analysis of it brings Henry to an unsettling conclusion:  Karl and Julian were killed by different people.  Specifically, Julian’s killer can be none other than Adam, as the skin sample contained antibodies for hundreds of diseases, both recent and ancient.  From this, and an uncomfortable conversation with the man himself, Henry learns Adam is at least two thousand years old and was experimented on by the Nazi’s at Auschwitz.  Because of this, Adam feels a connection to both Abe and Henry, claiming this connection is why he could never bring harm to Abe.

Back on the Karl case, police force a confession out of Erik, who accidentally struck his father dead after an argument over the art grew heated.  Following his father’s passing, Erik gave the vault paintings over to Julian to sell, inadvertently leading to the dealer’s death as well.

With one murder solved on the books and another off, Henry and Abe set out to learn about Abraham’s parents due to a surprise “gift” from Adam.  Whether this other immortal actually cares or is leading this pair into some sort of trap remains to be seen…

Would A ‘Dexter’ Spin-Off Include… Michael C. Hall?!