John Constantine’s met every kind of angel and devil there is, yet he’s often surprised by their dogma-selective fanbase. “A Green and Pleasant Land” is about cherry-picking what’s convenient and choosing words that best suit our plans, or vices. Take the madman in the park, Derek, who loves to quote William Blake while magical angels burn territorial gang members to death. Of course, he’s hiding from his own demons.

Spurrier highlights JC’s destructive stubbornness, as recruits Nat and Noah will no doubt discover is essential to the man. Like Chaz before them, Constantine’s toxic ways hurt both friend and foe. Despite all his talent, the man can’t keep a true friend. For madman Derek, his demise is built on the lie that his dead wife offers her forgiveness (from the grave, no less). “I spoke to her, mate.” Constantine assures him. 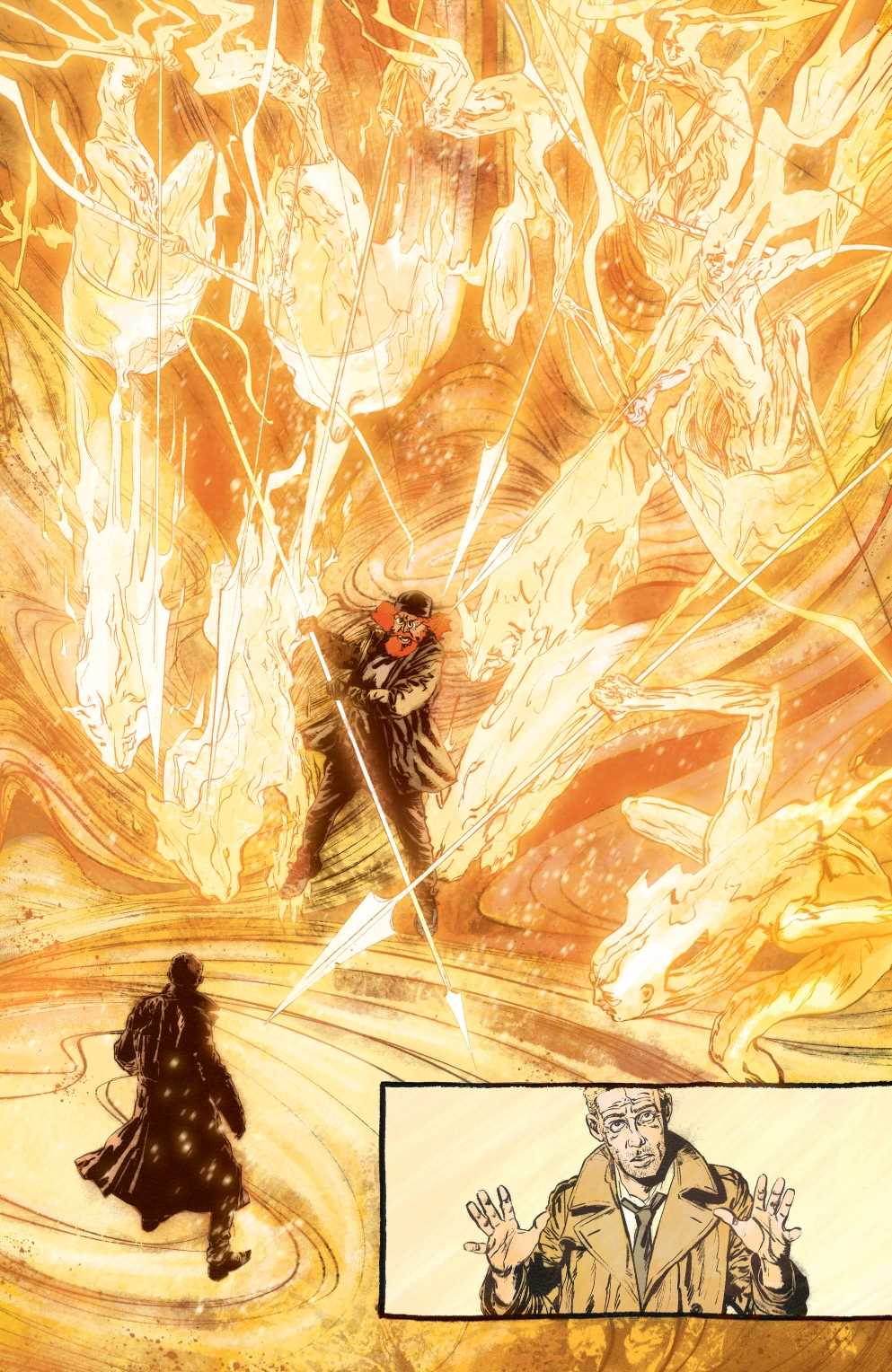 Like many of us, Derek lashes out at complete strangers, projecting his own sins. Spurrier gives JC all the right words as he forces the man to ask for forgiveness. “So there’s your f***ing cherubim right now,” Constantine quips, as Derek is torn apart by his precious angels, who are bloodthirsty for redemption. This is core Constantine–he gets his hands dirty, but in the end, he hands his targets the loaded gun. Not his problem, mate.

There’s an old issue of Warren Ellis’s run that shows JC walking past the ghosts of everyone he’s screwed over, while he hums Jesus and Mary Chain’s “I’m Only Happy When It Rains.” Add another ghost to the lot, because Spurrier’s JC is the scoundrel of old. All is right in the comic world.

Issue 3 wraps up the angel problem with a note on forgiveness. Spurrier and Campbell’s first arc could’ve been 1-2 issues, and it read a bit thin for me. But overall, they captured the old Vertigo spirit of the trickster Englishman, which gives me hope that Hellblazer is in good hands. With sidekicks Nat and Noah introduced, the next story promises Tommy Willowtree, a fellow magician who ran things while JC was away. Will they get on? Or will this be a swordfight (in the metaphorical sense)?

Comic Book Review: ‘The True Lives of the Fabulous Killjoys’

Ben There, Done That: Ben Affleck Refuses To Rush ‘The Batman’ Movie For Warner Bros