The fall of 1966 must have been a wonderful time to be alive for any kid that loved superheroes! Not only did Saturday morning introduce ‘Space Ghost and Dino Boy’, ‘Frankenstein Jr. and The Impossibles’, and ‘The Super Six’, but actual comic book characters made their way into animated form on ‘The New Adventures of Superman’, ‘The Adventures of Superboy’– both on CBS– and ‘The Marvel Super Heroes’ in syndication. Filmation crafted 68 six-minute ‘Superman’ shorts and 34 for ‘Superboy’. One 30-minute episode of ‘The New Adventures of Superman’ featured two ‘Superman’ shorts sandwiching one ‘Superboy’.  Bud Collyer voiced Superman and adult Clark Kent, reprising the role(s) he’d originated on the ‘Superman’ radio show. Like on the radio, Colyer adopted a higher-pitched voice for Clark, but would lower it as Superman, often during scenes where Clark would strip off his suit to reveal his super costume beneath, as he declared “This looks like a job for… (deepens voice) Superman!” With just six minutes, the plots were simple but captured the spirit of the Silver Age comics… actually a lot better than the live-action ‘Adventures of Superman’, which due to budget limitations pitted the Man of Steel against average crooks. 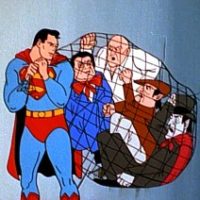 The animated Superman actually battled comic villains like Luthor, Brainiac (voiced by Cliff Owens), Mister Mxyzptlk (Gilbert Mack), The Parasite (although a more subdued take), The Prankster, Titano, and Toy Man. Other than Kryptonite, Superman’s greatest weakness is magic, but because there was a lack of magical foes in the comics, Filmation created a couple for the show, The Sorcerer, and The Warlock (the latter voiced by Ray Owens), both of whom made multiple appearances. The Warlock teamed up with Luthor, The Prankster, and Toy Man to form A.P.E. (Allied Perpetrators of Evil– Pictured to the right)! A.P.E. later returned with a different lineup consisting of Brainiac, Luthor, and The Warlock.

Unfortunately, Superboy didn’t take on any comic book villains, but he had a score of evil scientists, wizards, robots and aliens to contend with (as did Superman). Just like in the comics, Superman was surrounded by a supporting cast consisting of Lois Lane, Jimmy Olsen, and Perry White. Meanwhile, Superboy and Krypto lived with Ma and Pa Kent, and his love interest was Lana Lang. He also had a male friend named Timmy who accidentally caused Superboy to be transported back to Arthurian Camelot.

Another particularly fun episode of ‘Superboy’ was entitled “A Devil of a Time’ and depicted a Halloween party-bound Clark, dressed as a devil, fooling a group of superstitious criminals who mistook him for the real Satan! (That probably wouldn’t go over well today.) Things only got more exciting after the initial 1966-67 season. In the fall of ’67, new episodes of ‘Superman’ and ‘Superboy’ were included in ‘The Superman/Aquaman Hour of Adventure’. Obviously, these shorts were combined with adventures starring Aquaman and his sidekick Aqualad, as well as a revolving batch of “guest-star” episodes starring The Atom, The Flash, Green Lantern, Hawkman, the Justice League of America, and the Teen Titans. In 1968, the show became ‘The Batman/Superman Hour’, with Aquaman and the guest-stars replaced by Batman, Robin, and Batgirl. These later seasons are interesting enough to devote full Super Saturdays to, so look for those in the future. For ‘The Batman/Superman Hour’, the ‘Superman’ segments became two-parters, with one half before the ‘Superboy’ short, and the resolution coming afterward.

In 1969-70, the show reverted to ‘The New Adventures of Superman’ and the original thirty-minute format. These were all reruns. During this time, parents group Action for Children’s Television (ACT) began clamping down on violence in children’s television, and like all other superhero shows of the era, ‘Superman’ and ‘Superboy’ was driven off the air. The Filmation ‘Superman’, ‘Superboy’ and ‘Batman’ shorts popped up here and there in later years. I personally first saw them as part of ‘The Bozo Show’ which aired on the WGN Chicago cable channel, which was broadcast nationwide. These shorts aired along with the ‘Aquaman’ and “guest-star” episodes from ‘The Superman/Aquaman Hour’ on ‘The Superman/Batman Adventures’, a compilation show that also included episodes of Hanna Barbera’s ‘Super Friends’ and aired on the USA Network starting in 1995. It later shifted over to Cartoon Network and Boomerang. As far as I know, this was the first time the ‘Aquaman’ and “guest-star” shorts aired since their original Saturday morning run. ‘The New Adventures of Superman’ and ‘Superboy’ are quaint by today’s standards. They premiered in the latter half of the ’60s, but they definitely reflected the earlier JFK era, not the tumultuous late ’60s– the time of the Vietnam War, Watergate, Charles Manson, and the Zodiac Killer. The animation isn’t quite as nice as the Hanna Barbera cartoons of the era, but it was close. The plots are simple, owing to the six-minute lengths, so they can get formulaic if you watch them back-to-back.

As far as their legacy, obviously both Superman and Superboy have been featured in numerous adaptations, both animated and live-action.  In the intro video above, Superman is seen punching a series of meteors, which may have been emulated for the opening credits of the ‘Super Friends’ starting in Season 2.  Below, in the intro to ‘Superboy’, Ma and Pa Kent appear flanking Clark Kent.  That configuration resembles a similar sequent to ‘The Super Friends: The Legendary Super Powers Show’ in 1984.

Do you remember these Filmation classics?  Feel free to comment below.

As for what you can expect from next week’s Super Saturday, here is a clue: