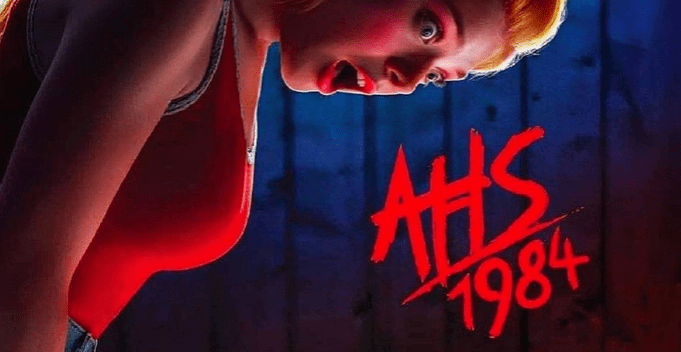 Here’s a story. In the year 1980, a young lady finds her daddy with a woman who’s not her momma. She goes to confront him, and sure enough the sexy music is there, the bed is there. But the other woman’s guts are exposed. She’s tied and gagged. 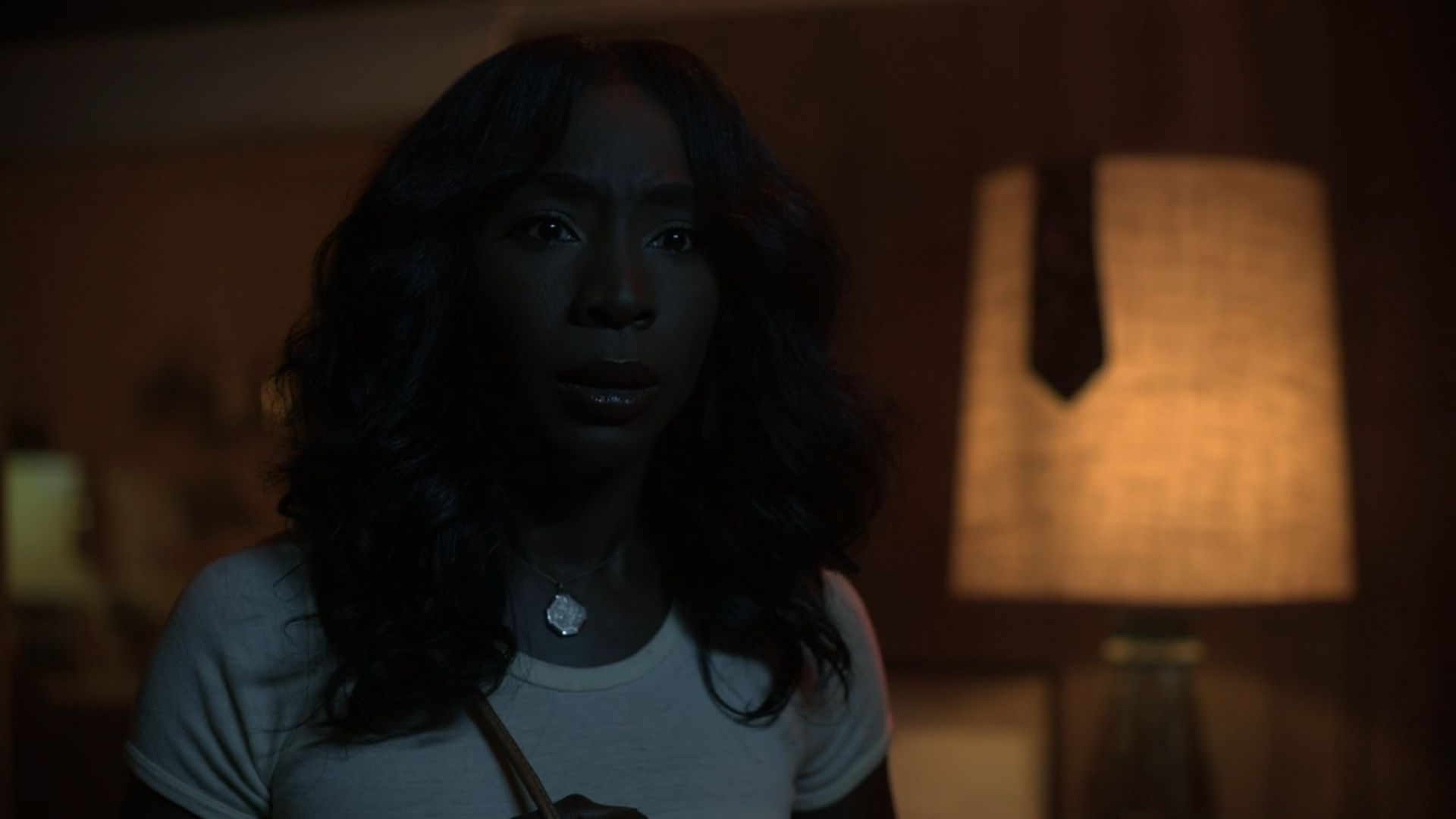 “Red Dawn” begins with a deeper look into her psyche, which we already know is a mess. Like Richard Jenkins from Six Feet Under, this father figure has a secret life, but it’s much darker. One of the darkest of this season in fact, with this woman we just met dying in a dimly-lit apartment. There’s no wacky humor here, just Polaroid photos of previous victims tacked to the wall. “This is not my daddy,” Chambers says, just before her father kills himself.

So this is her motivation to “understand evil.” Which brings us to rapist of the elderly, Richard Ramirez, who’s presently telling Chambers things he shouldn’t know, like her father’s nicknames. Satan’s given him this insight, I guess? Chambers then sees her father appear, in true Jedi fashion. Is the Devil responsible for this vision, too? 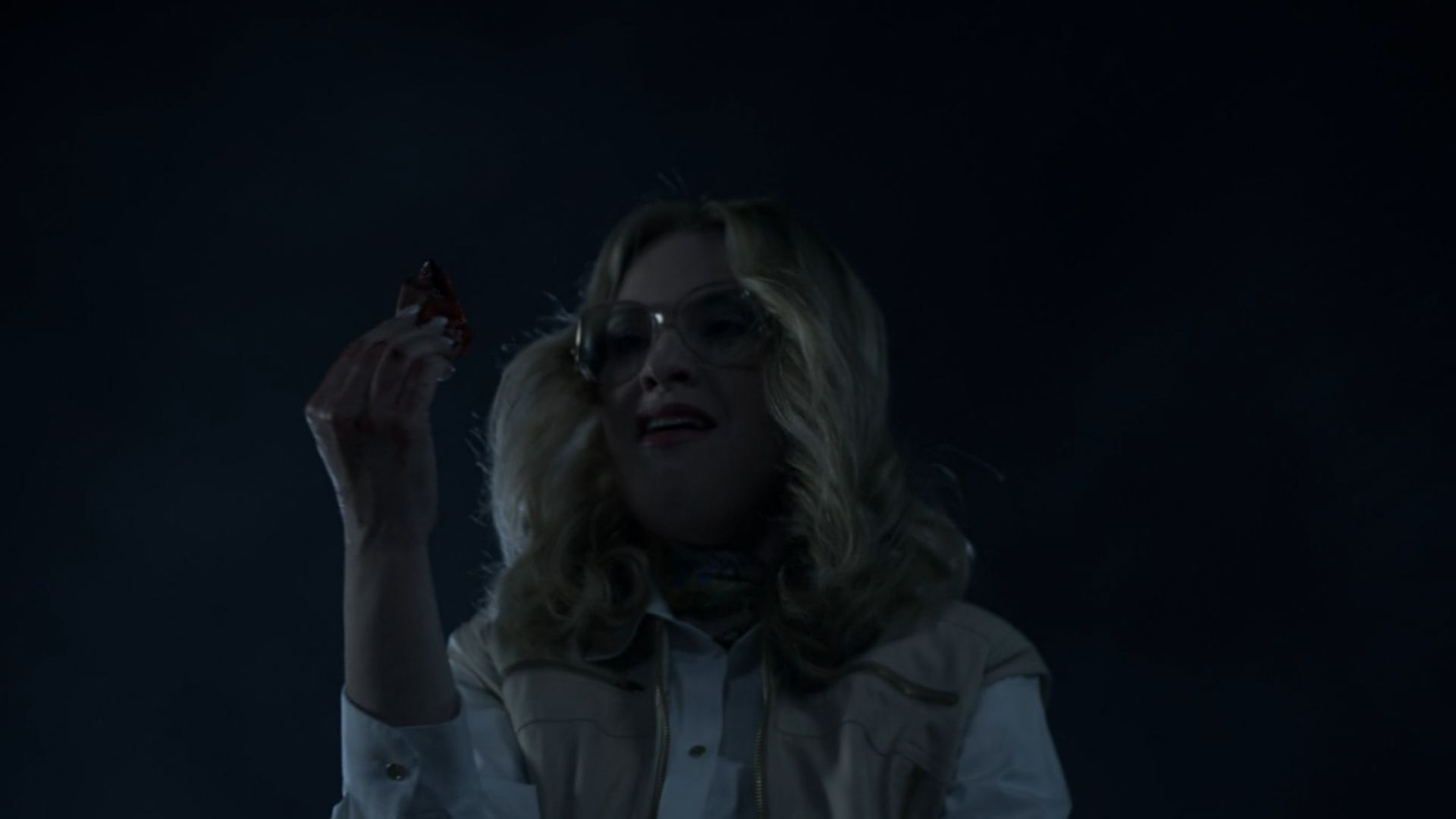 Meanwhile, Xavier is angry and ready to burn everything down. He vents about never being on the cover of TV Guide with a burnt mug, before getting beaned by Margaret Booth. Booth suggests that the others take shelter; her and Chet will boat to the other side for help.

Brooke and Montana hole up, until the former spots Ray walking around. Problem is—as you know—Ray was decapitated earlier. When spoken to, he appears confused.

Speaking of which, is Booth serious about her religious beliefs? Or is the Bible-thumping an act? This is especially unclear when she begins to attack Chet after saying “Lord, I tried to save him.”

She oars Chet upside the head, tries to cut his ear off but fails, stomps on his fingers, tries to sink him with an anchor, all before finally tearing off the ear by hand! It’s a fantastic death scene, morbidly funny in a way that AHS so often fails to deliver because it tries too hard. Kudos to the director for letting the action speak for itself. 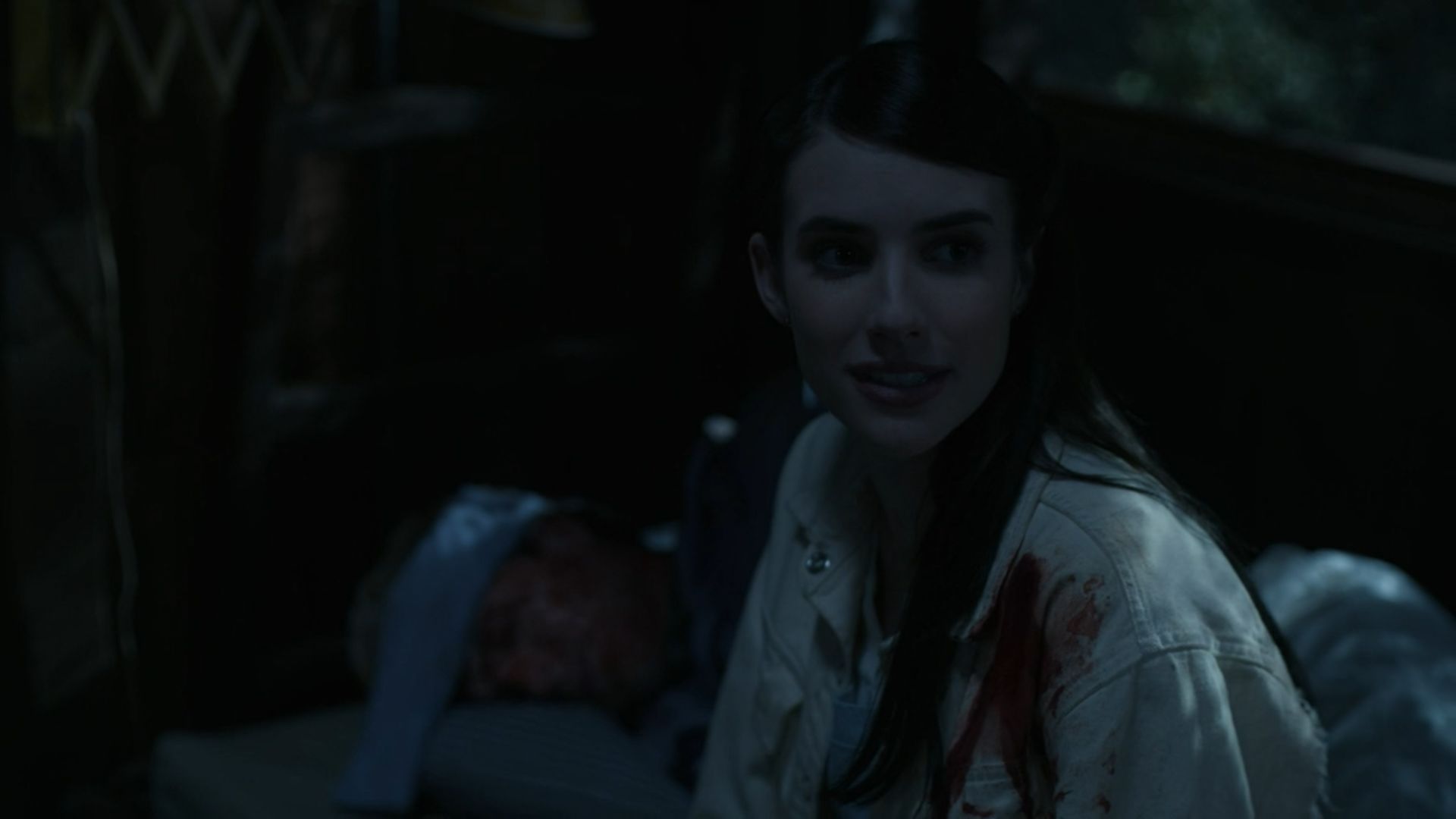 Brooke and Ray have a heart to heart. Ray asks if she came here to become somebody (like him), but she says it’s the opposite. She wants to disappear, be nobody. She spent her youth trying to make a loser boy feel good about himself, which eventually led to the altar! Talk about self-sacrifice.

Somehow this leads to a “we’re going to die, so let’s have sex” moment, and the two get busy (she’s a virgin). Afterward, it’s the most awkward of post-sex moments possible as she discovers Ray’s head in the refrigerator. That shouldn’t be there. 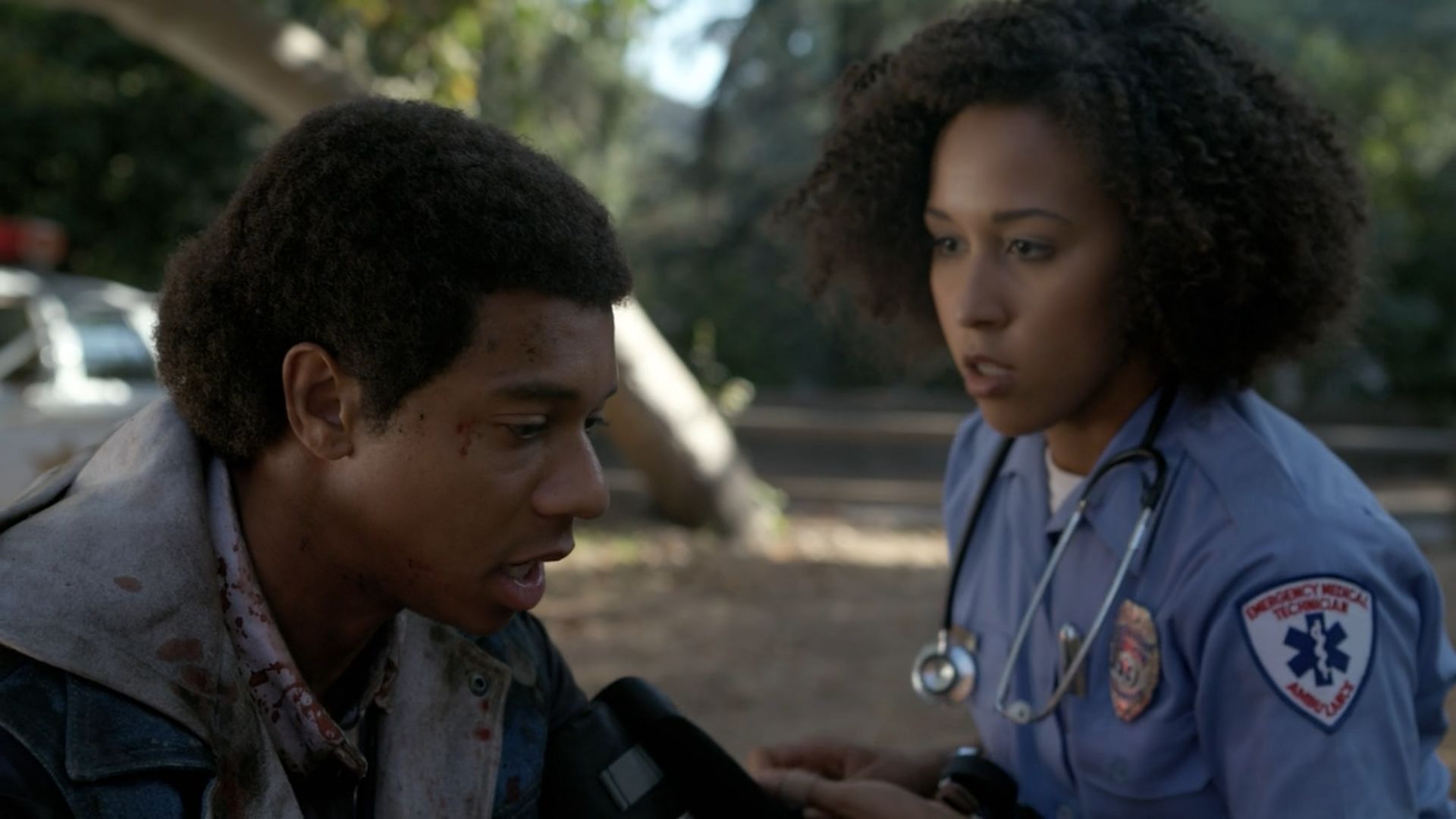 If you haven’t noticed, 1984 is quickly tying this story up. Much happens here, so in brief: Xavier chases after Chambers once he learns of her plot (“My future is in radio because of you!”). He kills Jingles (who’s killing Booth) via bow and arrows, then is killed in return by Booth. Later, we see Jingles resurrect and seemingly join Ramirez’s Satan Club. The two go on a road trip.

And Brooke? She fights evil-revealed Montana, stabbing her to death just as the new campers arrive on a bus. So much for Brooke being a nobody. Now she’s famous.

So much plot, not much room for insight. But I have questions. The levitation/resurrection—is this the power of Satan? We already know that death on a property means you’re trapped there (see Murder House), so why was it framed like a plot twist? Also, why didn’t Montana just kill Brooke when she was caught in a net? 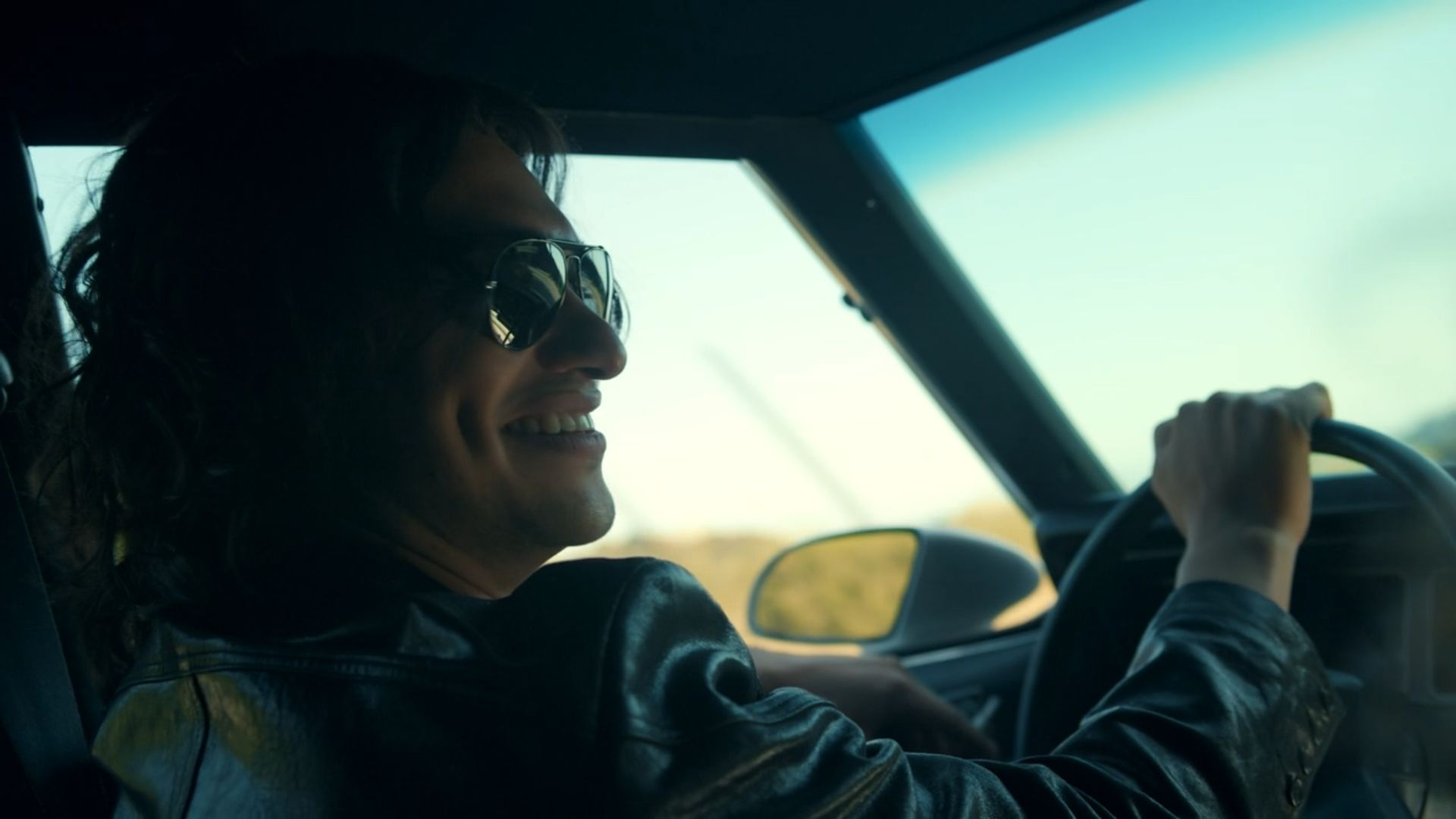 I don’t need all the answers, I’m just curious. Still, another strong episode. Next should be that change of venue I spoke of early on, otherwise known as Story B. Let’s hope we end up somewhere nicer than the bottom of the lake, where Chet is no doubt respawning, drowning, respawning, drowning…

NYCC 2018: Paul Wesley And James Wolk “Mix It Up” With Their ‘Tell Me A Story’ Characters

The Final Trailer For The Final Season Of ‘Orphan Black’ Has Arrived!