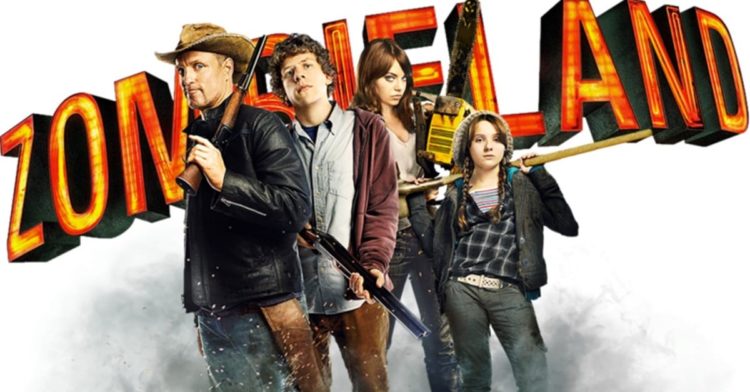 Many of you might be like me, and remember where and when you were when you heard about or even saw ‘Zombieland’ for the first time.  If so, then you’re likely asking yourselves the same question I am now: how in the heck has a whole decade gone by since the movie first came out?

Back in late 2009, the hype surrounding ‘Zombieland’ has grown to fairly epic proportions; yes, zombies were the “next big thing” for a while, but that was the early 2000s, and by the time we were just a few scant months from the calendar turning to 2010, the zombie hype train had left the station and wasn’t even necessarily on the tracks anymore.  So at that point, then, could you think of the last time a zombie movie received a major national marketing campaign and a coast-to-coast wide theatrical release? 2008’s ‘Quarantine’ had a few commercials on TV here and there, but 2004’s ‘Dawn of the Dead’ is the next-most “recent” movie that springs into my head in terms of big-time national exposure, and that was half a decade prior!

I’ll never forget my first watch-through of ‘Zombieland.’  It was at the relative dawn of my professional writing career, and I was one of the lucky few to see ‘Zombieland’ at a sneak preview screening,  replete with free swag: for weeks after, I wore my ‘Zombieland’ t-shirt and hat with pride, and the ‘Zombieland’ Hand Sanitizer and Twinkies were especially humorous after everyone had seen the movie.

As for the film itself, I feel the same way today as I did back then: ‘Zombieland’ does a surprisingly good job of mixing action, horror, comedy, and even a dash of romance for good measure. The inevitable comparisons to ‘Shaun of the Dead’ exist to those who don’t really know any better; believe me when I say that these are two VERY different films, they just happen to be the two most prominent examples of Zombie Comedies – the only people who will compare the two are people who are too unimaginative to think of anything else to say. The casting is pretty much spot-on – all four of the main characters seem totally believable and wholly engulfed into their roles. Jesse Eisenberg as the twitchy, better-safe-than-sorry Columbus keeps a written list of the rules that have kept him alive through the zombie apocalypse, and the film does a great job of “presenting” these rules throughout the entire movie. Emma Stone and Abigail Breslin play Wichita and Little Rock, sisters who have issues trusting everyone on the planet but each other. Breslin, in particular, feels very natural and believable in the role – I honestly never once during the movie looked at her and thought “Hey, there’s Little Miss Sunshine,” she really made this role her own and I think audiences appreciated that. Woody Harrelson is definitely a scene-stealer as the enigmatic Tallahassee; he shows a surprising range of emotions throughout the film, from begrudgingly taking Columbus under his wing to his one-man hunt for a very specific dessert treat to showing some of the pain from his pre-apocalypse personal life, Harrelson definitely gets to show the audience why he is a continually under-rated actor. The extras do a great job of being very believable and focused “fast zombies,” and there is a cameo in the movie that I won’t spoil for you, in case you’re randomly reading this feature and somehow haven’t seen the movie yet.  But the cameo itself is simply, pardon the pun, to die for! A brilliant turn by a brilliant actor, and the best part is that this person’s scenes don’t feel forced at all, they fit perfectly into the zany plot line.

My qualms with the movie were few and far between. A couple of noticeable visual goofs, with actors and objects being in one place or position and in a different spot when the camera shifts angles. The liberal use of the phrase ‘Zombieland’ by pretty much all of the main characters throughout the movie – we get it, you like to call your new world Zombieland. And, as is the case in many zombie films, the undead are conveniently not around when it’s time to have the characters talk to each other to progress the plot or when they have something else important to the movie going on, but when the zombies do attack –surprise! – they come in droves out of nowhere.

Other than these few nitpicks, though, the movie is tremendously entertaining and easily the one of the best zombie films I have seen in quite some time. The comedy is sharp and well-delivered, and kept many of us in the audience laughing continuously. The effects are great, very believable and very gory without going overboard. The plot and pacing of the movie is fantastic, and kudos to the director Ruben Fleischer and the creative team for not feeling like they have to spell out where the zombie virus came from and how it’s taken over the world and what can be done to stop it – this is a simply a great story about normal people living in a suddenly abnormal world and trying to make the best of it (i.e., survive). 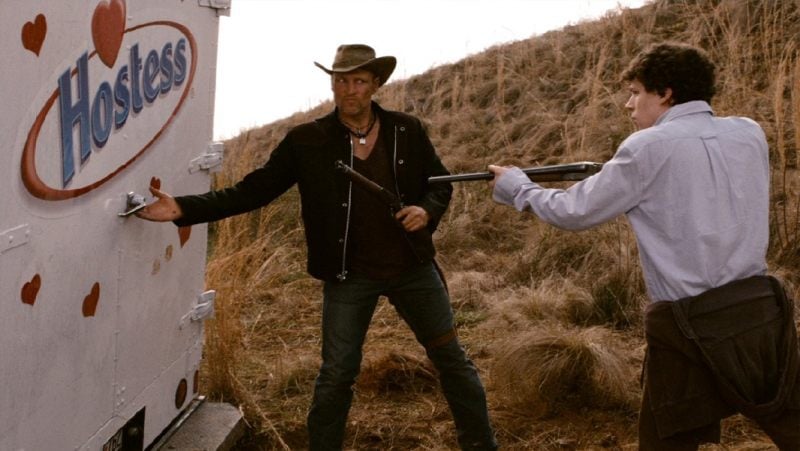 I was fully entertained and engrossed by the movie the entire time. Granted, the film is a scant 80 minutes long, but I’ve got to think that Fleischer and his team knew that by adding more scenes, they may detract from the frenetic flow of the film. As it stands, there are enough laughs, scares, and real moments to make this movie a tremendously engaging watch.

While the setting is your standard post-apocalyptic one, and the zombies are your basic “fast” ones, the movie gets unique kudos in two important areas. The climactic scenes are shot with our characters inside of an amusement park, so there are a lot of unique zombie kills and interactions based on what you find inside amusement parks, which I’m not sure has been featured prominently in a zombie movie before, if featured before at all. Second is the way Columbus’ “rules” are displayed, literally – they pop up on screen in text when they are relevant to the scene, often in funny or ironic screen positions or animations. Good stuff, and very original!

As mentioned above, the characters are all very believable and “real,” and their reactions to the world they are living in seem very on-par with their varied personality traits. The state of the country as the characters travel through is very believable as well, with just a few suspensions of belief asked from the audience: why do they zombies attack in hordes sometimes but are nowhere to be found other times? How are the electrical grids still on and functional everywhere our characters go, even though this story takes place “months” after the onslaught of the apocalypse? No movie is perfect, and these very few details definitely do not detract from the movie-watching experience. The opening credits of this movie really set the tone for the unique experience of watching this movie, and I can’t give enough credit to the creative team for coming up with these. The opening credits show exactly the opposite of what you expect to see in a zombie movie. Normally you have people running away at full speed from the zombies, and maybe some “quick cuts” of zombie mayhem; for the ‘Zombieland’ opening credits we see, in super-slow-motion, tidbits of people trying to escape various zombies in various scenes of mayhem. The super-slow-motion of these scenes is what takes the cake – you see a zombie throwing someone off a railing, a zombie bride attacking her husband in mid-toast, a zombie attacking firefighters, even a zombie stripper chasing down frightened johns. Just hilarious stuff, and the fact that it’s all in slow motion makes it seem even more surreal than normal. Combine this with great effects, solid pacing, and the few editing gaffes listed above, and you still get a very high score for the “technical” portion of this movie.

‘Zombieland’ really is easily one of the most enjoyable zombie films I’ve seen in years. I highly recommend it to everyone, and fortunately (as of this writing, not as of the movie being released) you don’t have to wait much longer for the sequel!

Ant-Man’ Release Date Gets Pushed From Fall To Summer 2015

New Images From ‘Captain Marvel’ Take Us Back To The 90s!