One of the most memorable scenes from the third season of ‘Stranger Things’ involved a callback to the ’80s film ‘The Neverending Story.’ Not only was it hilarious, but it paid off in spades on a minor subplot which had been running since the first episode.

According to Matt Duffer as to how it almost never came to appear:

“At one point they were going to sing the Ent song from Lord of the Rings. Then we were like, ‘Oh, well, Amazon is making Lord of the Rings, that’s probably not going to go over well with Netflix.’ Then we came up, I think it was Curtis, our writer, who came up with I think a better idea, which was The Neverending Story theme song.”

Thankfully they did use it! Now, to be able to talk about it and who “they” are from the above quote I need to warn you that there are spoilers ahead: 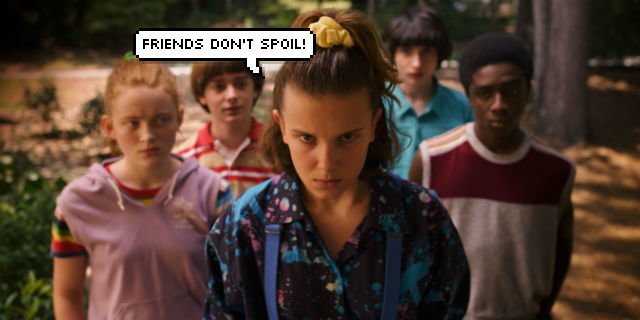 Gaten Matarazzo’s Dustin was the butt of jokes for the entire season because no one believed that he had a girlfriend named Suzie. Only, when she finally answered his call, a whole new level of embarrassment arose for the character. For her to answer a question vital to save the world, he had to sing the theme song from ‘The Neverending Story’ with her:

Fortunately for Matarazzo, he has previously sung on Broadway, so he was able to perform with no issues. Unfortunately for Dustin, it meant that the song was brought up in the last episode to tease him and likely will come up again as well.

Either way, it was a great moment for fans!

Are you glad that we ended up getting the theme song from ‘The Neverending Story’ over The Ent Song? Do you feel that this reference will be brought up again in the fourth season? Share your thoughts in the comments below!