Last week, Jeremy Renner appeared on Justin Long’s Life is Short podcast, and revealed that he turned down Guillermo del Toro‘s 2004 film ‘Hellboy’ and the implication was that Renner had been offered the titular role– the demonic red hulk, that was eventually played by Ron Perlman.  Renner explained that he simply didn’t get the script or the role.  He further stated that he would have also turned down the role of Thor in the Marvel movies, but was happy playing Hawkeye, a regular guy with an above-average skill set.  Once again, the implication is that he can’t get behind playing a supernatural being.

RELATED:  The Internet Can’t Get Over Jeremy Renner’s New Pop Single, But He’s Hardly The First Avenger To Go Pop

But in light of Renner’s statements, del Toro has come forward to clarify that Renner wasn’t offered the role of Hellboy, but rather the average human character Agent John Myers.  That role went to Rupert Evans.

Not the title role. The role of Agent Myers… which went to Rupert Evans. https://t.co/ogmYceZdU3

Evans’ Agent Myers is a bit stuffy and formal.  Renner has a rougher face, better fitting a character that is more of a bruiser.

‘Hellyboy’ has become a cult classic over the years and spawned a sequel, ‘Hellboy II: The Golden Army’, which was also directed by del Toro.  Evans’ Agent Myers did not return for the sequel. 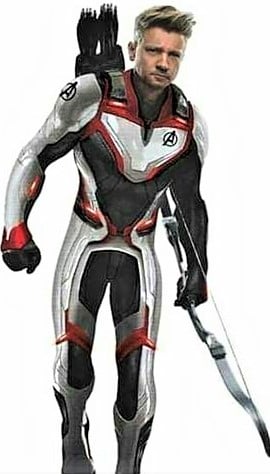 Recently Millennium Media attempt to reboot the franchise, without del Toro’s involvement, but that picture flopped.

Renner went on to star in Kathryn Bigelow’s ‘The Hurt Locker’, for which he received an Academy Award nomination for Best Actor.  From there, he entered the Marvel Cinematic Universe as S.H.I.E.L.D. agent and archer Clint Barton, alias Hawkeye.  After a cameo in ‘Thor’, Renner’s Hawkeye was featured in ‘Avengers’, ‘Avengers: Age of Ultron’, ‘Captain America: Civil War’, and ‘Avengers: Endgame’.  He will also star in his own series on Disney+.

He will step aside from the MCU into another comic book role as Detective Twitch Williams in the live-action film adaptation of the Image Comics series ‘Spawn’, opposite Jamie Foxx.

It’s pretty safe to say that things worked out for the best, and that Renner is a better fit for the MCU and that del Toro’s ‘Hellboy’ is fine the way it is.

Do you agree or disagree?

EXTREME SPOILERS: Is This The Plot For ‘Star Wars: Episode VII’?

‘jOBS’ Gets A New Clip And A Release Date