The 10 Most Heartbreaking Moments of Sci Fi TV

Whereas a lot of people like to rehash all of the great, epic romances on Valentine’s Day, some of us cynics enjoy that slow sink into the tradition of “anti-Valentine’s Day”. Maybe it is cliche, but love wouldn’t be powerful if it didn’t cause great heartbreak, especially when it comes to your favorite pieces of science fiction.

Now, I know there’s nothing more pain-inducing than watching the love of your life freeze into carbonite.  However I decided to go with television, because I conclude without any proof that you’re more emotionally vulnerable when you’re watching TV alone, chewing endlessly on burnt popcorn kernels.

Pull out the tissues. You’re about to ride on an emotional roller coaster from Sunnydale to the Other Side.

1. Buffy the Vampire Slayer: “The Prom” – Angel arrives to prom.

While Angel turning into Angelus might’ve directly been the cause of your adolescent depression, I had to choose their season 3 breakup because it’s just so darn… human.  After all, Angel and Buffy break up for very real reasons: Buffy was about to go to college and Angel, the vampire who can’t have sex, was ready to star in his spinoff series . . . You see? Very real, human reasons. Apocalypse-y stuff aside, they broke up because they were both in different places in their lives, which I guess is the real reason why a lot of relationships don’t work.

Additionally, (insert eye roll), Buffy and Angel just have to be so mature about it, too! My eyes welled up when David Boreanaz walks in to the prom, looking like he came straight from a Seventeen cover shoot, just to be with Buffy. He knew prom was important to her and honored it like a gentleman. It’s hard to break up with someone, but it’s even harder to break up with someone who’s an honorable person, even if they are a vampire.

2. Star Trek: The Next Generation: “We’ll Always Have Paris” – Picard and Jenice finally meet in their (fake) Paris cafe. 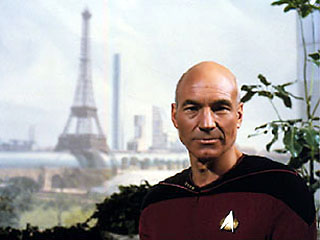 Okay, I know I may be the only one who liked this Casablanca-inspired episode and yes, I will admit it’s pretty forgettable minus the 3 Datas. However, as I was coming up with this article, I couldn’t help but think about the final few moments of this episode where Picard and Jenice finally meet in the Paris cafe, or at least a recreation of it in the holodeck.

It is revealed earlier in the episode that Picard was due to meet Jenice in Paris but ended up ditching her to have a very romantic affair with his one true love, Starfleet. When he’s reunited with Jenice after all these years, yes, it’s pretty awkward at first. However, when they finally have their moment in the holodeck, it’s incredibly bittersweet. Not only does it show an apologetic (though not regretful) Captain Picard, it honors a past relationship as being significant, even if it doesn’t work out in the long run. Ugh, so many feelings! Gross. Moving on.

3. Lost:  “I Do” – Jack sees Kate and Sawyer together on security monitor.

Jack, we feel you, buddy. You’re only flaw is being addicted to saving people (well, besides awkward facial hair and, oh yeah, alcoholism), and still your heart gets broken by a freckled fugitive. Even though you do kind of end up with Kate once you move on from purgatory (is that what happens?), we know this was a low blow from  a genuinely kind woman whose only flaw is loving men at gunpoint, and, oh yeah, killing her stepfather.

Oh, Kara Thrace! You and Lee finally hook up on the beach and you leave him the next day to marry Sam?! What are you thinking? You belong with Apollo! This was a wonderful episode of BSG where flashbacks framed by a boxing match reveal what happens to the crew on New Caprica. Kara and Lee have a romantic evening on the beach and profess their love for each other. Lee agrees to leave Dee if Kara leaves Sam and it seems like the stars will finally align.

However, Lee wakes up alone and goes into town to find out that Kara actually went and married Sam. Why? Oh, because Ronald Moore and David Eick like to take our hearts out of our chest and stab it!

Now, I’ve always liked Sam. After rewatching BSG, I like him even more. However, I always thought Starbuck and Apollo made a great team in battle and I wanted them to make a great team as a couple. They just keep missing each other, don’t they? It’s only when they are either piloting or punching each other in the face do they realize what they mean to each to other and that is just so fracking tragic. 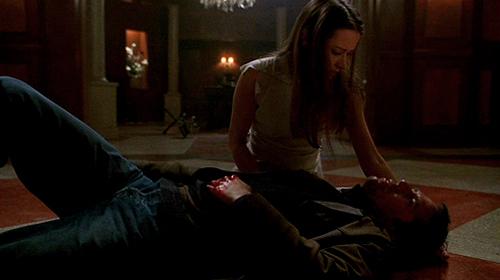 Even the frigid Illyria feels a loss over Wesley’s death in the final episode of the TV series. Wesley Wyndam – Pryce – rogue demon hunter – loses his battle fighting the Circle of the Black Thorn by being knocked out by Cyrus Vail. Right before he closes his eyes forever, Wesley agrees to let Illyria- a demon who has taken over Fred’s body-  to pretend to be Fred so he can be with his true love one last time while he’s alive. It’s an incredibly tender moment that ends the arguably tragic downfall that is the remainder of Wesley’s life.

Sorry to get all Wincestual on you, but if there was ever a heartbreaking moment on Supernatural I would have to go with the end of season 5 where we see Sam, who we assume has returned from Hell, looking into the window of a nice suburban home to see his brother, Dean, living in a different kind of Hell – domestic bliss.

Now, I was always rooting for the Winchester boys to hook up with some kick-ass lady-hunters, but as a betrayal to each other? No way, Castiel! The agonizing ending of this episode is quite the opposite from some other pathos-inducers on the list because it’s the budding romance that actually becomes the letdown. Hunting is in the Winchester’s nature and even though Dean thought he was fulfilling Sam’s wishes of him having a normal life, you don’t go against nature!

My current obsession is the British series, Misfits. (You can catch it on Hulu.) It’s about a group of young criminals who are required to perform community service and get special powers after a freak storm.

In the second episode, the group is required to work at a retirement home and one of our protagonists, Nathan, meets and hooks up with a young and attractive girl named Ruth. However, things are not always as they seem and it turns out Ruth is actually an 80 year old woman who uses her new found power to look young.

Nathan is, of course, disgusted and, the next day, when he sees an old Ruth waddling towards him to dance, he runs off. Eesh. You don’t leave an old person hanging during a foxtrot! Feeling bad, he heads back to Ruth’s home to see that she passed on. Nathan peruses through Ruth’s photo album, unable to apologize for breaking this old woman’s heart.

It makes you think that maybe, just maybe, Nathan learns a tiny lesson about empathy, but who are we kidding? We’re cynics, remember?

Why do people need closure so much? Don’t they know how many boxes of tissues it uses up? At the end of this episode, Rose has a dream where she sees the Doctor one last time on a beach. (It’s always a beach!)  Like Billie Piper’s tearful performance, we too have a difficult time holding back our sobs as the Doctor reveals he burns up a sun just to say goodbye!

But the most catastrophic moment has to be that the Doctor doesn’t even get to finish saying “I love you”!  I can’t even… I just …  just watch the clip. This season finale was a definite heartbreaker. After the physical and emotional risk of traveling to the Other Side and having to actually be vulnerable with someone, Olivia reveals her feelings to Peter to bring him home. Initially, we think everything is happy-go-lucky with Fringe Division. Alas, no! We have to pull out our poetry journals because our hearts must be toyed with, mustn’t they, J.J. Abrams! We find out that it’s actually Fauxlivia who made the trek back to Our Side, ala Sister Sister but with more parallel dimensions. I’m sure you were gaping in horror as well when you watched Walternate giving the real Olivia a death stare as he trapped her in solitary confinement.

10. The Vampire Diaries: “Rose” – Damon tells Elena he loves her.

I know about 50 percent of tweens will hate me for this, but I prefer a lonely, pining Damon Salvatore than this heroic Adonis that Elena swears she’s fallen for this season. I’m still rooting for Elena and Stefan and I want Damon to go back to being on the sidelines of true love. Why? Because we all know what it’s like to be in love with someone who doesn’t love you back and sometimes it just feels good to play the victim. Why do you think I sing “On My Own” in the shower all the time?

My point is I like Damon more when he doesn’t get what he wants. The audience tends to empathize with his manipulating tendencies more when Damon is in pain. Above all, a lonely Damon made the scene where he tells Elena he loves her all the more eloquent. He admits he doesn’t deserve her, and, with a single tear in his eye, compels her to forget he revealed his true feelings. For those of us who sadistically enjoy a good heartbreak, that’s how you do it.

So, there you have it: the top ten reasons why I need to stop living vicariously through television.

But seriously, though, let’s get real. What are your biggest sci fi heartbreaks? Let the tears flow, because you know what, girlfriend? (And boyfriend?) We’re here for you. Happy Valentine’s Day.