City of the Living Dead isn’t your parent’s grandma’s cousin’s sister’s walking dead. These dead folk have a leader: a priest (Fabrizio Jovine), who hangs himself in the opening scene. Since then, his corpse appears around the city–with rope still taut around his neck–to reanimate the dead for horrific bursts of violence as the city is overcome with mist, and its inhabitants flee for shelter. 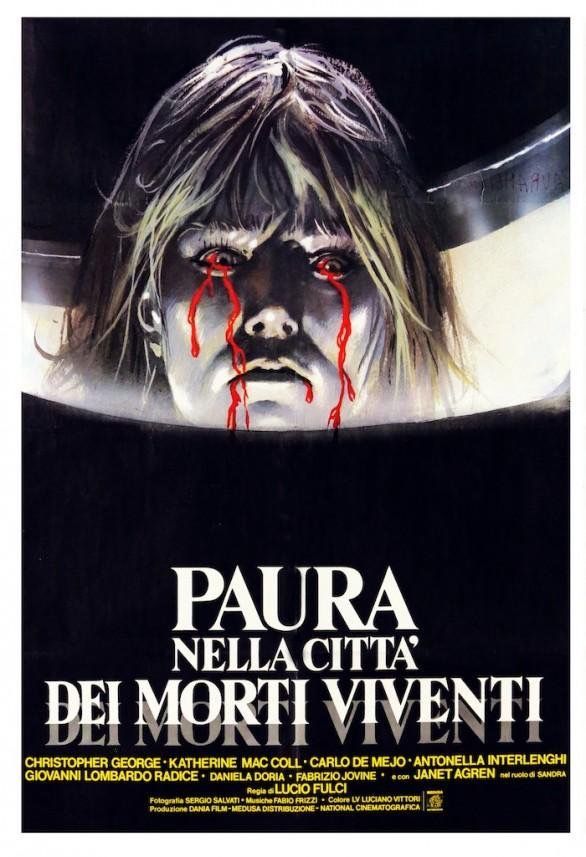 Lucio Fulci’s film covers one of the famed director’s beloved topics: the end of the world. Winds of a thousand maggots blow through shutters, the little fellas nesting in the actor’s left over 70s hairstyles. Fathers lose their minds, going to extreme lengths to protect their children. The hanged priest stares at a woman so hard that her eyes bleed, and all her insides–and I do mean all–pour from her mouth like a fountain.

Yes, like most Fulci films, this one is very graphic. Neither men, women, or children are safe. While some think A Quiet Place or Bird Box when it comes to perceived-pandemics, my mind goes to Day of the Dead, or this film. Fulci underscores emptiness with a city gone dark (is it ever daylight in this film?), extreme close-ups, and zero compassion. In one scene, a woman who’s buried alive claws at her casket, screaming loudly enough to catch the attention of star Christopher George (Day of the Animals). He responds by driving a pickax through the casket over and over, narrowly missing the woman’s face. The scene ends with a torn square that frames the woman’s screaming face. What’s great about this scene is the layering and escalation of the moment. Screams, then pick blows, then near misses–all edited to ramp up the moment’s insanity. And there’s plenty of that to go around. The practical effects are outstanding, and the kills are mean-spirited. A drill press is used to lobotomize a young man, and at least three people have their brains ripped out (with a handful of hair to boot!). It’s visually stunning, and the hanged priest (I almost typed “hung”) is an under-sung baddie, something like Phantasm‘s Tall Man in his ability to invoke nightmares.

I don’t have to sell anyone on Fulci. You’re either a fan or not, and his filmography stands among the most-analyzed in horror history. Still, I feel like City is overshadowed by Zombi and The Beyond, yet stands as a perfect film for our times. I consider myself an optimistic despite my increased mental health issues due to the current quarantine, so a nihilistic slice of Italian apocalypse comforts me. Why? As Tarantino once said, “Because it’s so much fun, Janet!” Or “Janice,” I forget. City is so dark that I can’t help but see a light in its pile of guts.

I know I’m not alone in my coping methods, so give this one a chance. There’s no Sandra Bullock or Jim from The Office, but there is a cast of fashionable Italians. And heaven knows they could use as much appreciation as we can give them right now. Leslie Jones Has Something To Share With The ‘Ghostbusters’ Haters

Will Emily Blunt Be The New Mary Poppins?