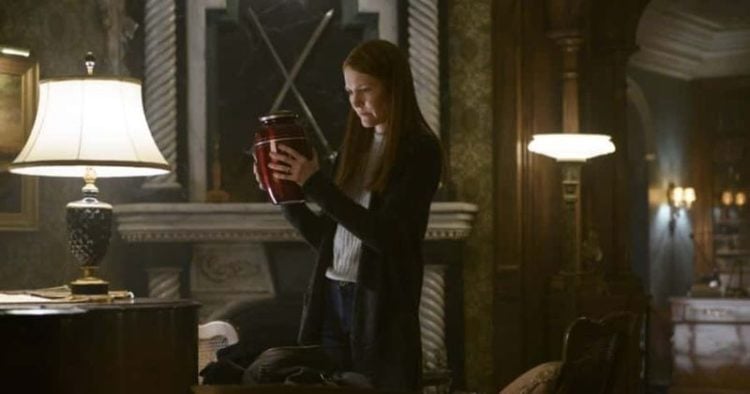 Ever since the Locke & Key premiere, despite his role in kickstarting the Locke family’s relocation to Keyhouse, Sam Lesser has been on the periphery of the season’s narrative. We’ve been given very little insight into his character, shown only snippets of him through flashbacks and a spattering of present-day meetings with Dodge. “Dissection” amends that, primarily focusing on Sam’s arc as the series moves towards the inevitable convergence of the Lockes and the enigmatic Dodge.

“She told me I was special. That she cared for me.”

Though its efforts to add depth to Sam’s character and motivations are commendable, “Dissection” still fails to make him a compelling facet to the story. He’s been used so little thus far, the glimpse into his psychological issues and difficult home life was akin to watering a plant that’s already dead. In fact, getting a non-Dodge related antagonist-heavy episode this late in the game fails to recapture the momentum Locke & Key desperately needs to adequately close out the season. Like most of the series missteps, my disinterest in Sam has nothing to do with the actor; in fact, Thomas Mitchell Barnet does his level-best for us to both despise and empathize with his character. He does yeoman work completing both, particularly the latter when, after Tyler inserts the Head key into Sam, we see a completely different version of him.

That doesn’t absolve Sam of the heinous acts he’s committed, but it provides a better understanding of how Dodge was so easily able to influence him to her whims. Manipulated or not, Sam’s still responsible for his actions though whether he deserves the fate laid before him — forever trapped in a ghostly form with no discernable way of rejoining his body — remains to be seen, as if this is the last time Sam Lesser makes an impact in the series.

“I made terrible, reckless decisions.”

Though “Dissection” fails in some respects, it is a tipping point that orchestrates several paths towards a convergence. For Nina, the near-death of her family pushes her over the edge and back into drinking. It’s a sad but almost understandable descent for her character, so aptly followed in “Ray of F*#&$% Sunshine”, as is Kinsey and Tyler forced to deal with their mother’s detachment from reality.

For the two siblings, the trauma of Sam’s invasion has helped them repair their earlier split, with Kinsey finally understanding the pitfalls of being a girl without fear. Not only do the siblings admit their mistakes but take steps to make amends, with both each other and their friends. Closer than ever, the two not only work together to identify Dodge’s endgame but revisit the Omega door. Thanks to Nina’s mini-breakdown (after the Mending key/cabinet fails to revive Rendell), they find the Omega door key within their father’s scattered ashes.

For the last few episodes, the disconnect between Tyler and Kinsey has been an anchor hampering their ability to reach consensus on handling Dodge and the key business. To have the duo finally return to the same page comes at the right time considering Kinsey’s shocking discovery that Dodge is actually Lucas Caravaggio (Felix Mallard, Neighbours, Happy Together), Ellie’s supposedly deceased high school sweetheart.

To this point, the lack of information on Dodge has been a major factor in my fascination with her character (well, that and Laysla De Oliveira’s sinister charm). “Dissection” and “Ray” build on that, providing how she’s been the force that’s put Locke & Key’s present-day events into motion. But even in that, there remains unanswered questions on her motivations and abilities. What is she looking for and how was she able to contact Sam through the Keyhouse sketch in Rendell’s office? But Dodge is not just a ‘she’, but also a ‘he’. It’s a mind-bender for sure but, using the Identity key, Locke & Key’s primary antagonist flips from Dodge to Lucas in Ellie’s kitchen. Despite this being straight out of the comic, I’m not sure how effective this will be playing into the greater narrative.

There was an allure to Dodge as this mysterious villain that made her so enthralling. I’m not sure that this twist is a positive for her character’s arc and, more importantly, how it all shakes out at the end of the day. What I do know is that, with only a couple keys in their possession, Tyler and Kinsey are behind the eight-ball against a demon with much greater knowledge and instinct for using the keys than their rudimentary knowledge.

Even though they don’t fully capture the mystique of the first trio of episodes, “Dissection” and “Ray” offer some interesting advances to the story while still leaving wiggle room on the narrative’s end. Kinsey’s fear is literally out in the wild now and God knows what it’ll do or if she’ll be able to capture it and return it to her mind, and though she and Tyler have acquired the Omega key, are they prepared to use it and open the Omega door… a door they have no clue as to where it leads or, worse, what may come through once it’s opened.

It was good to finally see Nina’s somewhat sterile connection to her kids given substance though, it’s too bad that it took her breaking her sobriety to do so. Though Bode continues to be an afterthought, there’s still room for him to return to a primary factor in the story’s concluding arc. Finally, what role (if any) will the Mending key/cabinet or the now-ghostly Sam play into the final battle with Dodge/Lucas. It seems like a lot but now that the villain has been narrowed to Dodge/Lucas and the most sought-after key is no longer a MacGuffin to be found, two episodes are plenty to draw Locke & Key into a satisfactory conclusion.

Note: In my first review I mentioned that, in “Head Games”, Kinsey buried her fear in her own mind but, after using it to distract Sam in “Dissection”, that was obviously not the case. Also, when thinking about that, it really doesn’t make sense considering the representation of her mind was a shopping mall and we saw nothing suggesting there was an outdoor portion to her psyche. My mistake!

First Look At ‘The Flash’ In Full Costume And In Action