John Constantine Is Back And He’s Dirtier Than Ever

If you’re new to John Constantine, welcome, and get used to the smoke. He’s got quite the habit. But if John’s an old friend of yours, then you’ll be delighted to know that he’s allowed to tell dirty jokes again, because this series is under DC’s new mature readers line, Black Label. Cheers!

This inaugural issue begins with Constantine off-panel, relaying one such joke to a bar full of hipsters. After he gets tossed on his rear, he strikes up a conversation with the bouncer, a Glaswegian woman named Nat. “Ask ye this: ye know why tough birds love Spartacus?” She asks. “Cos he was hung like this,” she says, gesturing like she’s talking about a big fish. 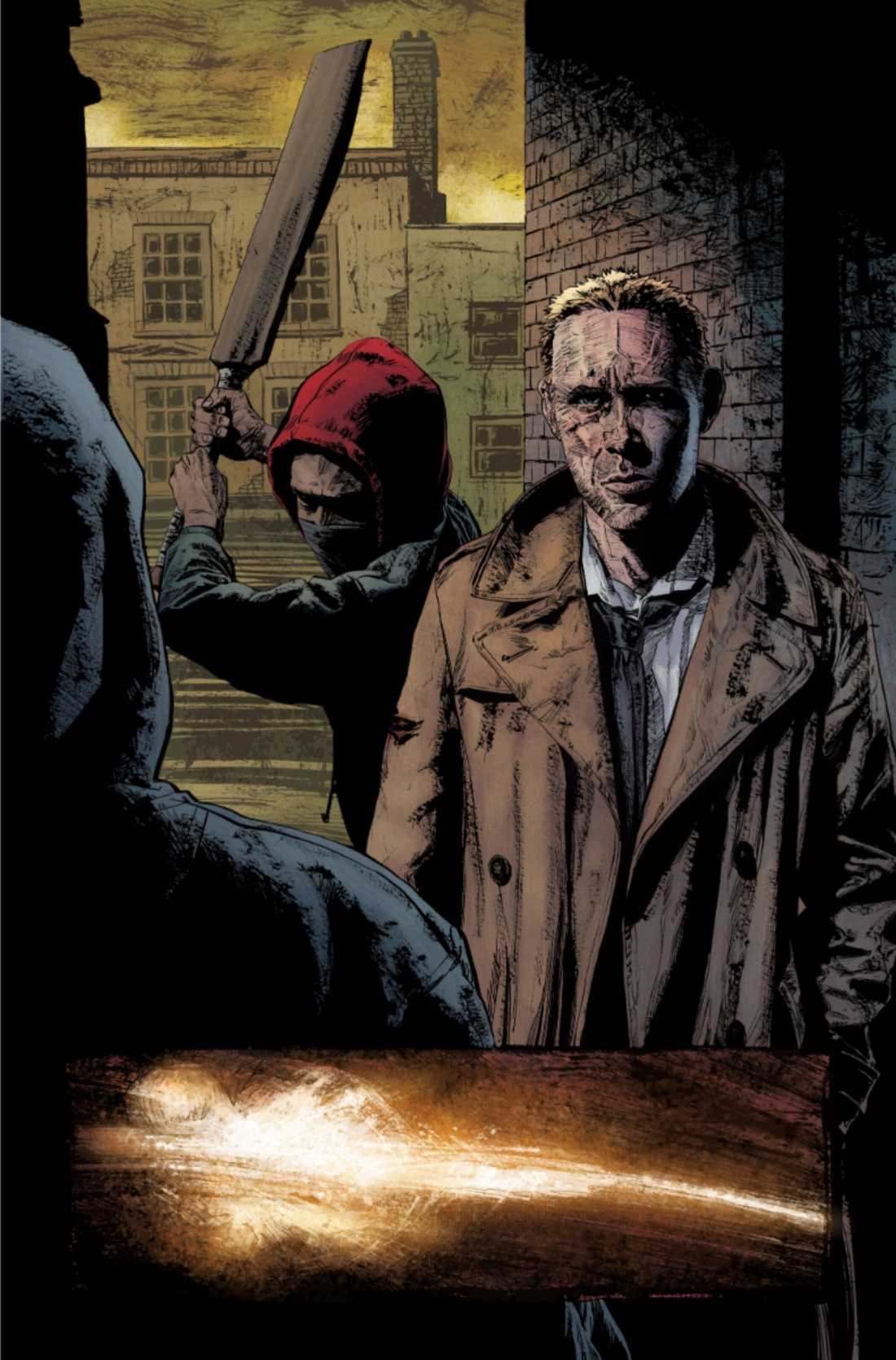 This woman is clearly immune to Constantine’s rough exterior. Immediately after introductions, she says, “I’ll not f*ck ye, John,” then sizes him up as someone who “collects folks” just to make himself feel like he’s got a circle of friends. Yeah, that’s about right. John relies on his thick skin here to remain undaunted. He’s not lonely, he corrects her, just “Lacking in acquaintances.”

Speaking of skin, lads are losing theirs in the park. It seems that “angels” have arrived to prey on the addicts that frequent the place. The disembodied narrator explains: “With expressions of the very purest serenity they begin, lovingly, to skin their catch.” In horrific detail, a splash page shows this “loving” activity, as members of the Ri-Boys gang are torn open.

While this occurs, a haruspex “consults his meat,” which is the severed arm of a young boy. What is a harupsex, you ask? Someone who uses entrails and bits to “see” omens, and the like. Here he watches his drug runners die. He isn’t happy, because this park is where they sell wares to the needy. These angels have brought sales to a halt. 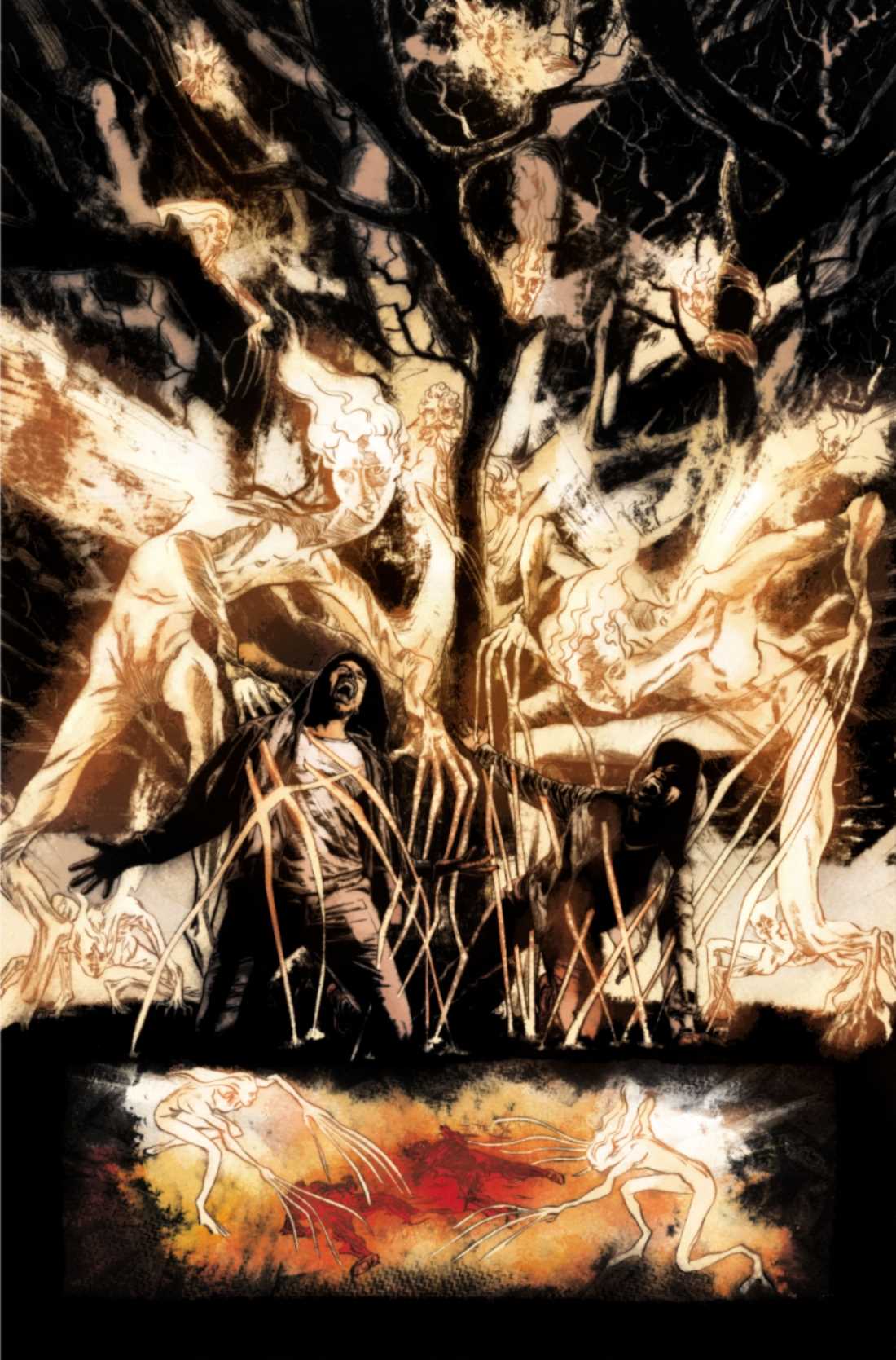 Soon enough, Constantine is summoned by the gang via cricket bat. He wakes to Ri-Boy leader, K-Mag delivering a monologue. He’s shirtless, covered in talisman-esque tattoos, and surrounded by gutted animals. This haruspex wants John to go on a “blood run” with member Isa, to either witness or protect. Constantine says no, until K-Mag threatens to kill one of the younger members. Lookit that, John has a heart.

But Constantine can’t save Isa when the angels come for him and a nearby addict. As they’re both torn open, something different occurs—a swarm of flea-like seeds enter the bodies, birthing small creatures, not unlike the goblins from The Gate (1987). “And then all is stars and dust” as they fade into the ether. An exit like this is sure to get our magic man on board.

Like Constantine, I’ve been out of the game for a while. The original Vertigo series is dear to me (I’ve read all but the Paul Jenkins run), a Who’s Who of UK writers—Neil Gaiman, Jamie Delano, Mike Carey, Warren Ellis (Castlevania), Garth Ennis (Preacher). Non-Brits Brian Azzarello and Jason Aaron show up, too. Not to mention Alan Moore’s Swamp Thing, where the character lit his first cigarette. I’m no snob when it comes to “Cape” comics, but I lost interest once the flagship Vertigo series ended. Constantine was sent back into the proper DC Universe, where I’m sure he had fine adventures. But this wasn’t the same grimy a-hole that I knew and loved. Or at least his world wasn’t the same. 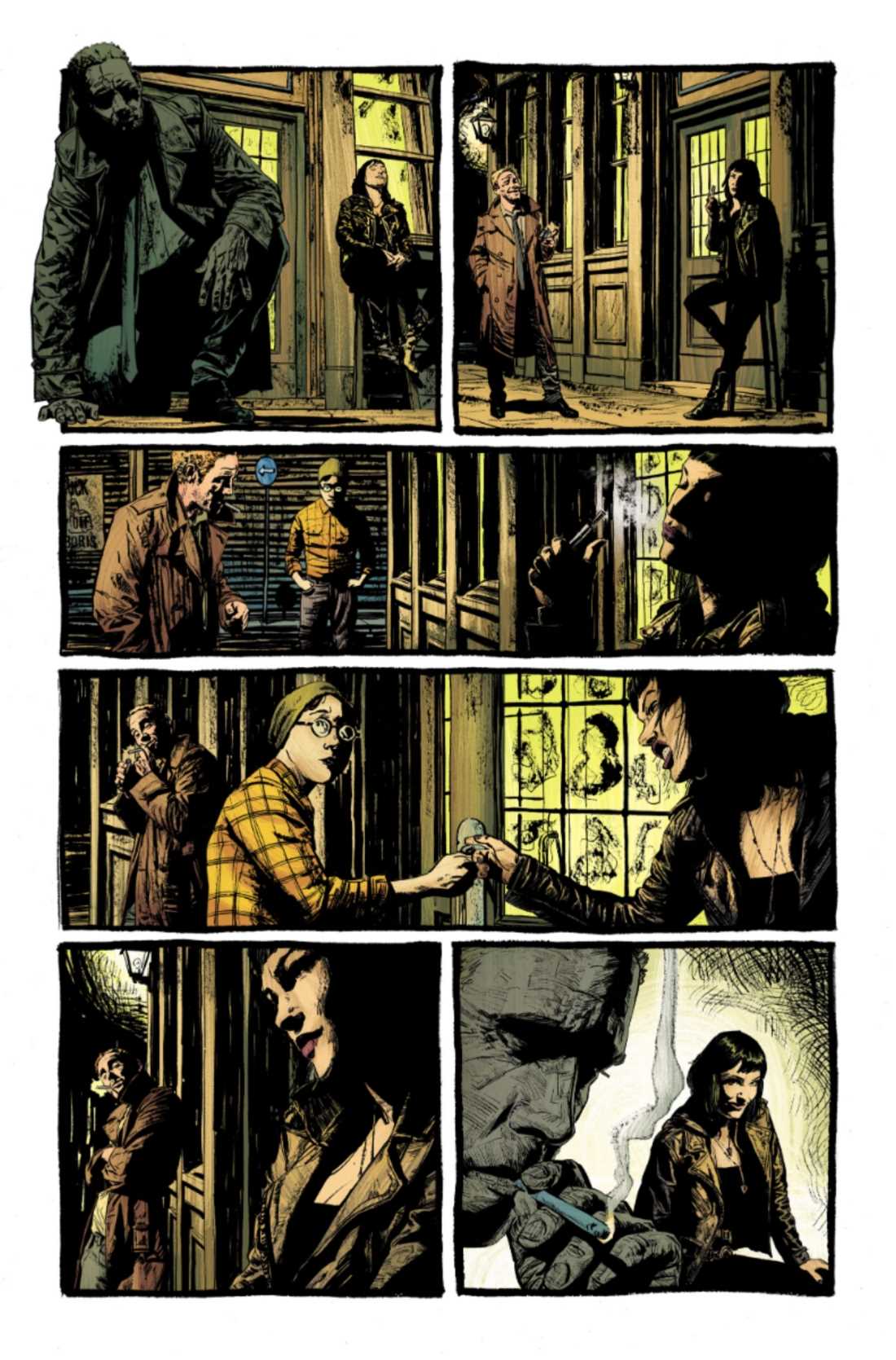 “A Green And Pleasant Land, Part One” is a return to form, the unfiltered JC we all deserve. Taking place after Gaiman’s original mini-series from the early Nineties, The Books of Magic, writer Simon Spurrier drops Constantine back into the fog of London, and Aaron Campbell’s art perfectly captures John’s dirt-eating grin. One look at the man and you’d be a fool to keep his company — he’s sure to use you up. Speaking of which, there’s no mention of Chaz, Constantine’s bestie/scapegoat. Nat looks to be up for that role. Unfortunate for her, but hooray for us readers.

Gods, I’ve missed this book, and Spurrier’s a perfect writer for the job. This isn’t the first time he’s dipped his toe into the “Sandman Universe,” having penned a Timothy Hunter series. And if this issue’s Boris Johnson Eyes Wide Shut moment is any indication, he’s free to conjure whatever his sick mind desires. No, I’m not going to describe the Johnson scene, other than to say the man’s in his birthday suit, with only his face covered by a freaky mask. You’ll have to see that one for yourself, dear readers.

But do come back next month, when we shall see if Constantine blows smoke into an angel’s face.