IO Games are a new genre of web games built with HTML5 and websockets. These highly addicting browser games require no sign-up or login, no downloads and no purchases. They are the ultimate form of casual gaming, outside of mobile games. Below we’ve compiled a list of the most popular IO game hits of 2019, using data from some of the biggest web game hubs.

Made by the infamous French developer duo known as “LapaMuave,” Devast.io is a 2D survival game at its core with a lot of “Fallout” elements, nuclear wasteland notwithstanding. Gather food and materials, unlock skills, build stuff and, most importantly, survive! The game has a lot of charm and is a serious competitor to moomoo.io, the first, and likely most popular “2d survival game” in the IO Games space.

A pretty cool thing about Devast is that you can actually purchase your own private server, and essentially have a game world all to yourself (or to be shared with friends). This is a feature not really seen before in IO Games (or any game genre for that matter). There’s also a fully-featured map editor which makes it really stand out even in a crowd selection of games.

Devast is made by the same people that made Starve.io and the team is rumored to already be working on their next IO Game title.

Although ShellShockers has been around for quite a while, it has recently seen a big revival. It had a 15K Alexa rank 90 days ago and is now 11K. Made by a small, independent game studio based out of Vancouver Island, Canada, ShellShockers has recently undergone some UI improvements and added new competitive maps. ShellShockers.io was likely the most popular 1st-person shooter before Krunker.io – and that’s saying something! It consistently achieves a high rating on iogames.space, with a whopping 82 rating. To put that in perspective, the highest rated game on iogames.space is 83.

Shell Shockers is a consistently fun browser shooter. When it first came out, the performance was horrible, likely because so few browsers could properly render 3D. Now that HTML5 and webgl have become more widely adopted, perhaps the popularity for ShellShockers will continue to rise.

Sketchful is not like your typical IO game in which you “shoot things” or “grow bigger.” Instead, Sketchful is an online drawing and guessing game. It’s basically like Pictionary or Charades. The artist receives a secret word which he or she needs to draw and the guessers have to figure it out before the time runs out or they run out of guesses. 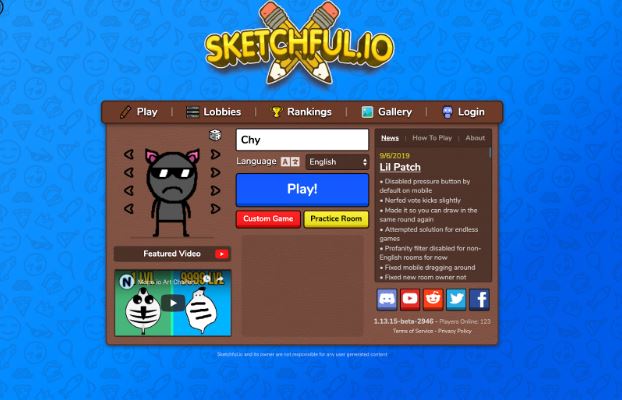 You can play in public or private games and can even play practice games.

Although it’s heavily based on a real-world concept (i.e. Charades) Sketchful is a clever browser adoption. It can be addicting and sometimes a nice departure to the competitive “kill or be killed” nature of most IO games.

Little Big Snake (or LBS) was recently upgraded from Flash to HTML5. What started as “just another slither.io evolved into something much more, with a story in which you “Snake your way through the competition to complete missions, upgrade your skills and destroy other players.” It is so popular now that Nintendo Switch and Steam store versions are in the works making it one of the rare crossover games started on the web and moving to other platforms. Krunker.io was created in 2019 by Sydney De Vries, a developer in the IO Games space since 2015 best-known for his 2D survival game, MooMoo. Krunker.io is a 1st person shooter which plays somewhat like a cross between Counter Strike 1.6 and Minecraft. The game made quite a splash on Twitch with a lot of big-name streamers playing it while warming up for their mainstay games. The controls are snappy and responsive. The game rounds are quick-paced and high-adrenaline.

Krunker is by far the best adaptation of a FPS in the browser. It’s also fully-featured, with dozens of weapons, an elaborate map editor and modding community. What I love most about though is just how “no-nonsense” the gameplay is. It does what it sets out to do and it does it well.

In case it gets blocked in your work or school you can also play krunker.io on Addicting Games where it maintains an impressive 82% rating. IO Games Space gives it 80% and arcadespot gives it a 3.7 out of 5.

What is the future for IO Games?

It’s tough to say what will happen next in the IO Game genre next year, in 2020. Krunker.io is one of the first truly 3D realtime IO game to attract a following. Before that, most of the hits were 2D experiences. With more browser adoption of webgl (and specifically, webgl 2.0), it would not be surprising to see more 3D browser games in the future. Whatever the case, the audience for IO games continues to grow! Chris Scott is a general manager at Addicting Games and an HTML5 enthusiast. He made a few IO games himself, including tacticscore.io and booster.space.