In one of the most radical reboots ever, in association with SyFy, Hanna Barbera is bringing back the ‘Banana Splits’, but this time, they might be murderers!  In ‘The Banana Splits Movie’, Fleegle the dog, Bingo the orange ape, Drooper the lion, and Snorky the elephant are once again cast as children’s TV favorites (all voiced by Eric Bauza), but when a “lucky” kid named Harley (Finlay Wojtak-Hissong) receives a trip to see the taping of the show for his birthday, things take a dark turn. 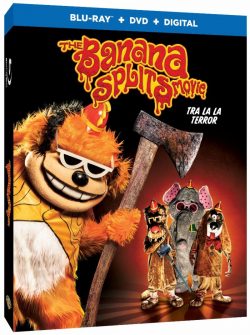 A security guard reveals that late at night, he sees the Splits come to life and ride around in their signature cars.  Obvious, this film was made in response to the popularity of the video game ‘Five Nights at Freddy’s’ (whose popularity looks to be on the wane, in all honesty), which has had a movie in development for a few years now but still hasn’t materialized.

Unlike many other Hanna Barbera properties, it probably wasn’t as big a deal to take the Banana Splits and turn them into killers (maybe), because the show aired in 1968-70.  Anyone old enough to have watched it is way too old to care about Hollywood “ruining their childhood.”  (Measles probably took care of that.)

This short clip from the movie isn’t gory or action-packed, but teases the creepiness of silent, human-sized mascots seeming to appear and disappear randomly.

Dani Kind, who stars on Syfy’s ‘Wynonna Earp’ will portray Beth, with Romeo Carere as Austin, Steve Lund as Mitch, and Sara Canning as Rebecca. The movie will be directed by Danishka Esterhazy, while Jed Elinoff & Scott Thomas provide the script.

‘The Banana Splits Movie’ will be released on digital on August 13, with the Blu-Ray combo pack and DVD arriving on August 27.