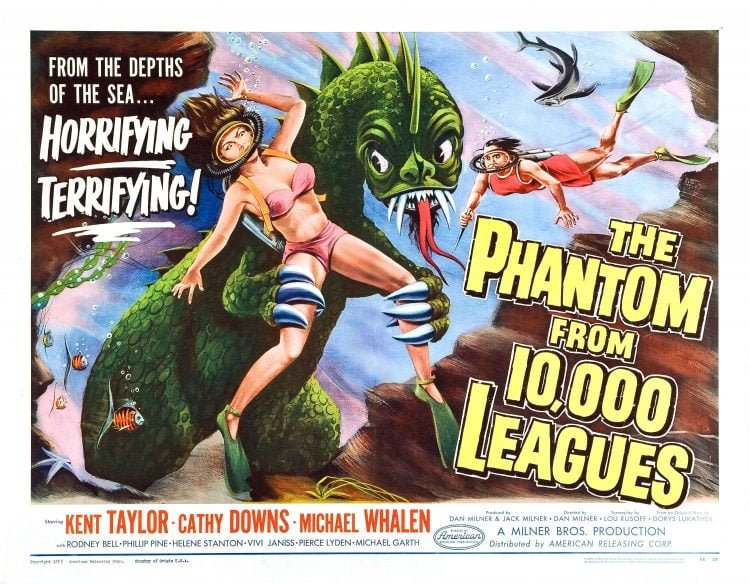 The 1950s was a banner decade for B-movie creature features, and many of the best of those sprouted from the appearance of a new form of power: nuclear energy. Scores of movies flooded movie theaters that were centered on mutations caused by too much radiation, providing the masses with a variety of mutated creatures such as giant Gila monsters, giant tarantulas, giant shrews, and even an incredible shrinking man. Only a few of these films made their way into the realm of pop culture icons; those that didn’t either made their way to cult status or, more commonly, faded into the annals of movie history.

‘The Phantom from 10,000 Leagues’ falls into the latter set of films. Released in December 1955, the movie tells the story of Dr. Ted Stevens, a world-renowned oceanographer, hired by the US government to investigate a rash of mysterious deaths along the Northern California coast. Each of the bodies was covered with burns, and upon a brief examination of one such body washed up on the beach, Dr. Stevens attributes them to radiation of some kind.

Joining forces with an agent from the Department of Defense, Dr. Stevens questions the only person in the area likely to know what’s going on – Professor King from the local university. With the professor dodging questions about what he knows of the bodies, Stevens discovers a deposit of uranium just off the coast, guarded by a fearsome, mutant creature. They soon learn that the professor has known about the uranium for some time, even conducting experiments on the local sea life to determine the effects of radiation. 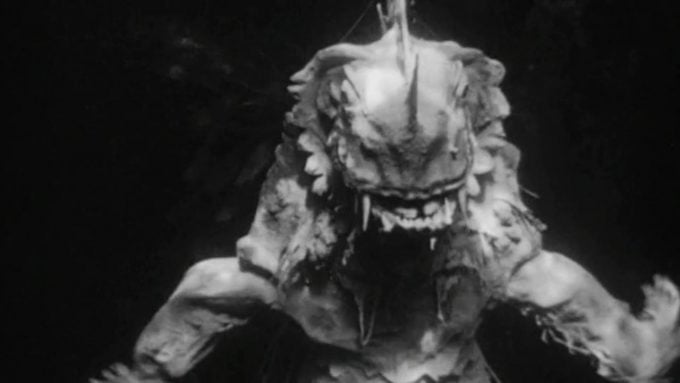 What none of them realize is that another party is also interested in the uranium deposit, hoping to sell it as a weapon to some interested buyers. Soon, it’s a race against time to destroy both the uranium before it falls into the wrong hands, as well as the creature before more beachgoers wind up dead.

Science run amok, nuclear weapons and a mutated sea creature – this has the makings for a perfect B-movie, yet it somehow failed to hold my interest. I found myself laughing at the so-called Phantom and scratching my head at the actions of the characters. It felt more like a group of friends got together one day and said, “Hey! Let’s make a movie!” But I’ve seen worse than this, sad to say.

For a mutant creature film, the creature itself doesn’t get much screen time. This might be a good thing, as the Phantom looks more like a man in a bulky lizard costume rather than a creature from the depths of the ocean. The eyes don’t move or blink, it walks along the ocean floor rather than glide through the water, and I think I even spotted human hands sprouting from the claws. As for the human characters, they all seem like actors reading lines, marking their spots, reading more lines and so on, which is a bit boring. 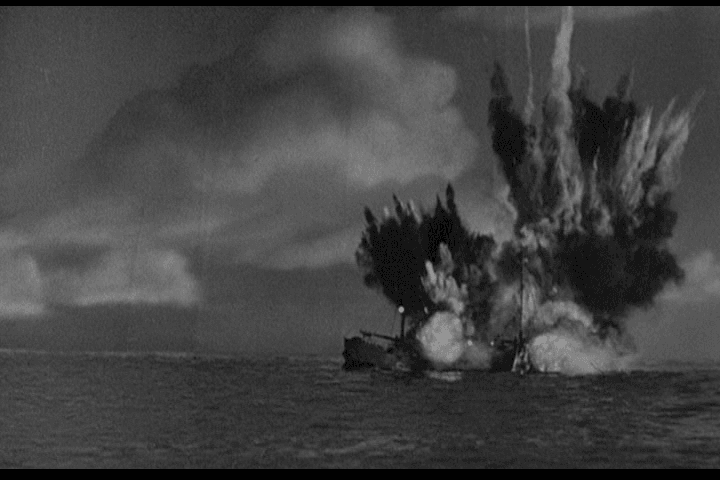 The story has some holes in it, such as: why is the Phantom the only creature affected by the uranium or who Professor King’s secretary’s son was (it’s her motivation for wanting to put an end to King’s work), or why the actors run around the sand in dress shoes and high heels. The biggest flaw, though, is in the title: 10,000 leagues. That equals roughly 30,000 miles… so where did this Phantom come from, if the uranium deposit is only a few miles off the coast? (And as a side note, the movie takes place during the summer break at the nearby university, yet the beach is deserted. Where are all the sunbathers?)

There is not much in the way of special effects for this sci-fi/horror film. Well, except for a ship of some kind that explodes within the harbor when it comes too close to the uranium, and the other explosion that destroys the Phantom. Other than that, this is a pretty vanilla film in the SFX department, even for an old-school ’50s film.

One of the taglines for ‘The Phantom from 10,000 Leagues’ was: “Freezing horror! Hideous atomic mutant strikes from the depths!” Sadly, the laughable so-called Phantom and lackluster performances are far from horrific. And I’m still not quite certain where the freezing comes into play.

Halle Berry Confirmed For ‘X-Men: Days of Future Past’