Happening this weekend, in a convention center far far away in Chicago, IL…

Yes, it’s been a whole year and it’s once again time for the Star Wars Celebration! This annual convention is designed to be the “ultimate fan experience” for fans of the ‘Star Wars’ universe of all ages! The Star Wars Celebration is a place where people from all over the world can come together to share their universal enjoyment of one of the biggest franchises of all time! It helps that with Disney managing the license now we have new ‘Star Wars’ content available pretty regularly, so every year the convention seems even bigger and better than the years before! The Star Wars Celebration, which runs from Thursday April 11th 2019 through Monday April 15th, 2019, will be jam packed with huge announcements (including the full name of and hopefully a trailer for ‘Star Wars Episode IX’), celebrity guests, fan activities, film screenings, and of course- exclusive collectibles!

Today we are bringing you information on some of the coolest new Star Wars Celebration Exclusive convention exclusive collectibles! While some of these have a specialty shared retail partner to bring them to the masses who are unable to attend, the majority of these items are only available exclusively at Star Wars Celebration 2019 (and on Ebay afterwards for what we can assume is a huge mark up)! Check out some of our favorites for this year below!

Earlier this year Diamond Select Toys announced that they had officially purchased Gentle Giant Ltd. and would continue to release a number of products under the Gentle Giant Ltd. banner. These plans included a number of ‘Star Wars’ pieces, so it’s super exciting to see Diamond Select Toys bringing two of them to Star Wars Celebration as new convention exclusives! Event exclusive items include a 1:6 scale bust of Hera Syndulla from the animated ‘Star Wars: Rebels’ series, as well as a 1:8 scale statue of Darth Maul with his robotic spider-legs as seen in ‘Star Wars: The Clone Wars’ animated series. While both of these pieces are based on characters from stylized animated properties, they have been sculpted to look like they are straight out of a live action film, bringing some real life to these normally animated characters (especially Maul, who looks terrifying!)! These two are available exclusively at Star Wars Celebration 2019, but will also be made available to Gentle Giant Premier Guild Members through their website. Check out the full details below! The captain and heart of the Ghost crew, Hera Syndulla was a gifted pilot and leader. While Hera was a strong commander – and especially adept at dogfighting with TIE fighters – she was also warm and nurturing. The Twi’lek could bring out the best in her team, which consisted of very different personalities, making them believe in themselves, each other, and their struggle against the Empire. Hera will be made available as a 1:6 scale resin bust, for a price of $120.00.

A deadly, agile Sith Lord trained by the evil Darth Sidious, Darth Maul was a formidable warrior and scheming mastermind. He wielded an intimidating double-bladed lightsaber and fought with a menacing ferocity. Though he fell in battle against Obi-Wan Kenobi, the Zabrak from Dathomir would prove to be much harder to destroy than originally believed. Darth Maul will be depicted with his Force-constructed spider legs in a 1:8 scale Collector’s Gallery statue, available for $200.00.

Star Wars Premier Guild members will be able to pre-order the busts beginning March 25. All others can come by the Diamond Select Toys/Gentle Giant Ltd. booth between April 11 and 15th! See you in Chicago! Kotobukiya has a lengthy history of producing some of the highest quality statues on the market. This year for Star Wars Celebration they’re bringing us one large new ARTFX Statue as well as a 2-pack of smaller ARTFX Statues. Available exclusively at the convention itself, Kotobukiya will have a large new Bronze Darth Vader ARTFX Statue. Vader is in 1:7 scale, standing approximately 12″ tall. This bronzed dark lord of the Sith will set you back $119.99! 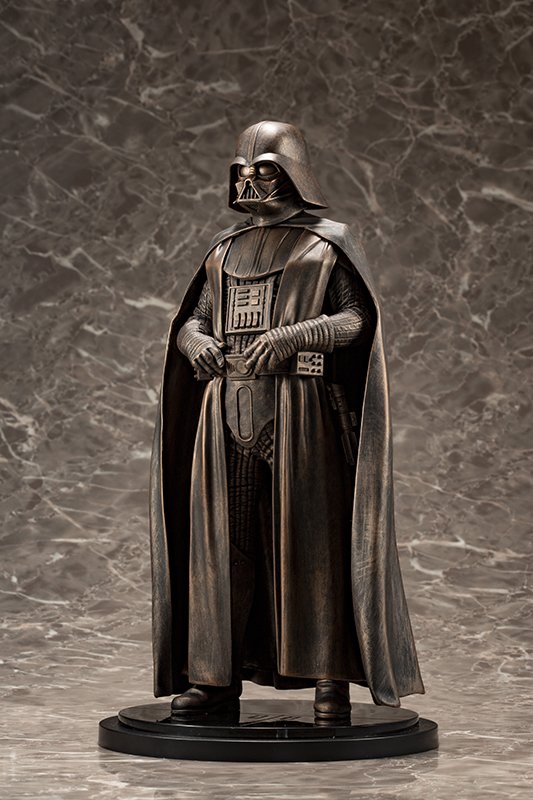 Kotobukiya will also have an ARTFX Statue 2-pack of the droids R2-R9 and R2-B1, who are in a slightly smaller 1:10 scale and stand around 4.5″ tall each. This droids 2-pack will be available outside of the convention as well through Kotobukiya’s website and can be pre-ordered with a price of $129.99. We first saw these back at Toy Fair in February, but it doesn’t make them any less exciting! For this years Star Wars Celebration convention exclusive, the team at Hasbro is releasing two new figures in their fan favorite 6″ ‘Star Wars: The Black Series’ line. The new figures are of Obi-Wan Kenobi and Darth Maul as they appeared in ‘Star Wars Episode I: The Phantom Menace’, which is celebrating it’s 20th Anniversary this year. There figures will be carded on special ‘Episode I’ packaging reminiscent of the original packaging for the figures released back in 1999 for that film. Obi-Wan is an entirely new figure, while Maul is a re-release with an all new (and much better looking) head sculpt. It is assumed that both figures will be available later this year in standard ‘Black Series’ packaging for the mass market. In the meantime, these two specially carded versions are available exclusively at the Star Wars Celebration in Chicago! The crew over at Beeline Creative have lots of cool new exclusives available for Star Wars Celebration this year! So many in fact, that we couldn’t even get images for all of them! This year they’ve got a lot in store for fans of their Geeki Tikis drinkware line, with new Tikis in various sizes and scales, collectors sets, and even new Swizzle Stick drink stirrers! Check out the full lineup listed below! As with nearly every major pop culture event, the crew at Funko have a huge number of convention exclusives planned for Star Wars Celebration! This years exclusives include lots of specialty chrome POP! Vinyls of some of your favorite characters from the original trilogy like Darth Vader, Yoda, Boba Fett, Princess Leia, Chewbacca, and a Stormtrooper. These six characters will be available in blue chrome exclusively at the Star Wars Celebration event, while gold chrome versions will also be available at both the event and with shared retailers. If chromed POP! Vinyls aren’t your thing there are still exclusive POP! Vinyls of Watto and Darth Maul, who will be available at shared retailers as well. Finally Funko rounds out their Star Wars Celebration exclusives with a set of three new POP! Pez that includes Jabba The Hutt, Salacious Crumb, and a Gamorean Guard! Check the full info and images below! Watto is a shared exclusive with Hot Topic and EMP Germany.
Darth Maul is shared with Walgreens and Entertainer UK. Watto is a shared exclusive with Hot Topic and EMP Germany.
Darth Maul is shared with Walgreens and Entertainer UK.

While they might not be the first name you think of when it comes to ‘Star Wars’ collectibles, but they have had a super strong low key presence in the market for years! This year for Star Wars Celebration they’ve got a handful of new items heading our way including an Ahsoka Tano enamel pin, a Boushh Itty Bitty, a Darth Maul Salt and Pepper Shaker (yes, it’s a two-in-one), and a Keepsake Ornament 2-pack! Check out the full into below! For Star Wars Celebration 2019, the team at Bandai is bringing a beautiful new 1:12 scale model kit of the killer droid 0-0-0 (Triple-Zero) from the fan favorite ‘Doctor Aphra’ comic series! Unfortunately we do not have any information available regarding whether this will be shared or not, or how much buying one will set you back, but so far it looks pretty fantastic! Last but not least, the team at LEGO is bringing fans an all new Darth Vader Bust kit! This set is going to be exclusive to Star Wars Celebration, although a limited number of sets will be made available to the Target REDcard holders through Target’s website after the convention has ended. Check the full release below!

Turn to the Dark Side with the LEGO® Star Wars™ 75227 Darth Vader™ Bust! This exclusive Star Wars Celebration building set features incredible dome and faceplate details, including a brick-built respirator encased in iconic black armor. Vader’s helmet is adorned with raised ridges and studs, which adds to the dramatic effect, and the instantly recognizable Dark Lord of the Sith will always strike fear in his enemies.