Inside an auction house, dark magic is used to secure a journal previously owned by the legendary John Dee.  This enigmatic figure has no trouble taking the book, with his victims literally bubbling away in their own blood. 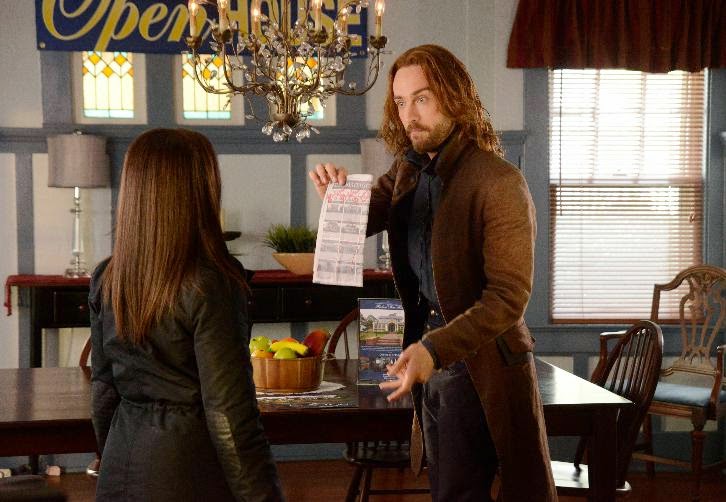 On the other side of town, Ichabod is busy enlisting Abbie’s help in one dangerous pursuit: house hunting.  Crane’s noble, yet misguided, attempt to further integrate with modern society is cut short when Abbie catches wind of the recent murders.

Ichabod quickly catches Abbie up on the supernatural history of John Dee, and is aware his so-called ‘journal’ is actually a magical tome called the Grand Grimoire.  The duo consults with an empowered Katrina to learn that the book was summoned to Sleepy Hollow by dark magic, most likely by whoever stole it.  A crime scene analysis reveals traces of Moonflower were found in the assailant’s blood.  This new bit of info causes Katrina to realize the killer is none other than Salomon Kent, orchestrator of the Salem Witch Trials.

A quick flashback sequence shows how Kent went from a lovelorn Warlock who used his abilities to help colonists, alongside members of Katrina’s grandmother’s coven, to a twisted figure broken and shifted into a dark shadow of his former self.  The coven did eventually manage to bring Kent to justice following the events in Salem.  With a combined effort, they exiled him to purgatory where he has remained for hundreds of years… until these recent events with Moloch freed Kent from his cage.

Elsewhere, it turns out Henry is alive and well as he can be, seeming to mull over and question his past decisions in a motel room.  Despite wanting to keep his distance, Henry finds himself drawn to the plight of the mother and son who live and own the motel, and even intervenes when a trio of goons threatens them.  But time has not chilled Henry’s wrath.  He dispenses of the criminals by using dark magic and calls himself a ‘wolf among the sheep’, and then proceeds to vanish with some unknown objective in mind.

Back with Crane and company, Katrina is able to trace the Grand Grimoire and determine it is still incomplete, a precaution set in place by John Dee to keep just anyone from being able to use it.  They still have time to stop Kent from using the tome to summon his lost love by opening the gates to the underworld.

Outside the precinct, Abbie encounters Irving and expresses her reluctance to openly trust him after the mysterious events surrounding his return. Despite her lingering doubts Abbie seems keen on accepting her former captain back into the fold.

Following a tip from the station, Ichabod and Abbie manage to track down the other half of the journal and corner Kent as he begins his dark ritual.  While they deal with the terrifying creatures he summons, Katrina faces down Kent and manages to back the warlock into a corner.  But he tempts her with propositions of dark magic and all it can offer to slip off into the night, with the Grand Grimoire still in hand.

With Katrina’s powers taxed and struck with the realization that Kent isn’t going to raise his beloved from the grave but attempt to travel through, and alter, time itself, Abbie calls Irving in as back up.  The three of them devise a plan to take down Kent with some modern day equivalents to the magical arts.  They quickly neutralize the man with a group assault of poison darts, punches, and man made lighting via a generator and a convenient puddle of water.  Afterward, Ichabod hurries off to check on Abbie and, unbeknownst to them, Irving finishes Kent off and secures the Grimoire for himself then proceeds to lies about the events when the duo returns.

A one-two punch of betrayals follows in the wake of this success.  While Abbie and Ichabod head off for some celebratory brews, Katrina practices dark arts in secret, Kent’s temptations hitting her hard.  In the woods, Frank ambles about with the Grimoire and who should arrive except Henry Parish?  His connection to Irving appears to remain strong and while their goals still remain unclear, one thing is certain:  Henry does not view Moloch’s death as a defeat, but as an opportunity.

A new threat has arrived in Sleepy Hollow, and it couldn’t be more personal.