Inside an art restorer’s office, evil stirs and blood spills out of a painting, much to this man’s shock.  When this stream of blood disappears right before his eyes, the numerous questions running through Grant’s mind are evident on his face.

At Ichabod’s cabin, Abbie speaks with him as he and Katrina prepare for a date night, at none other than the Historical Society, of course.  Their little attempt at reconciliation quickly turns into a case for Ichabod; with a triple threat of the painting reemerging, his friend Grant the art restorer appearing troubled, and Katrina sensing a dark presence. 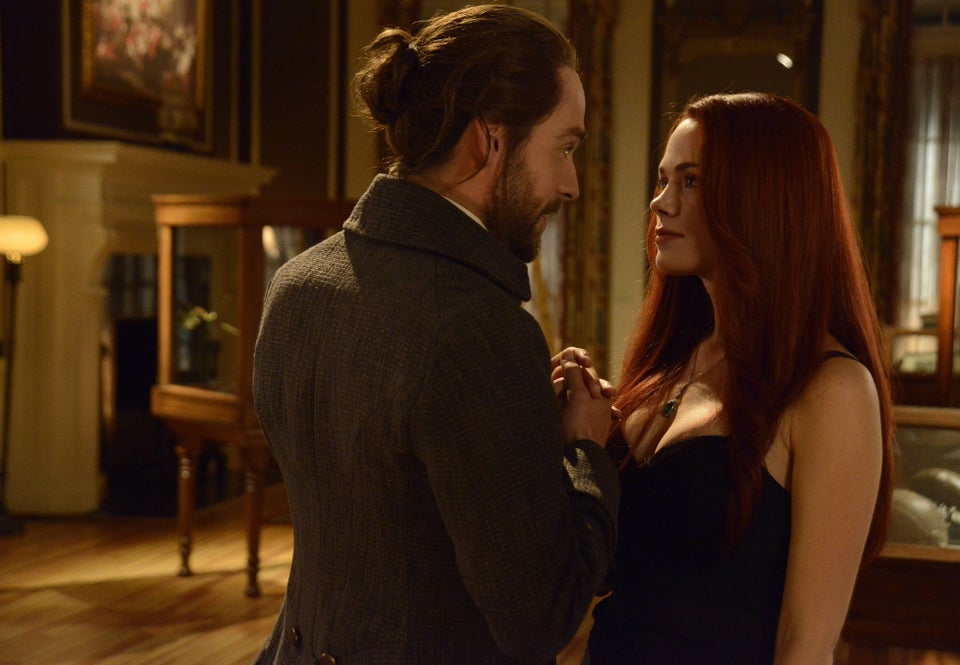 Worst fears are realized when Grant appears dead moments later; his body arranged in the depiction of the Hanging Man. Coupled with knowledge she gained from her friendship to Abigail Adams, Katrina and Ichabod quickly connect this killing to a series of murders in the late 1700s, realizing there is a supernatural force contained inside the painting itself.  The creator and killer, James Colby, resides within, hoping to use blood from those in the real world to complete his image of the Hanging Man – the painting within the painting, and thus become reborn into our world.

Meanwhile, at the precinct, Abbie takes some quiet time to go over her family’s journal… only to have her peace interrupted by the most surprising of visitors:  Frank Irving.

Abbie is cautious despite her deep respect and gratitude towards her former captain.  Still hurt over her being betrayed by Brooks and his dealings with Muloch in account, she can’t help but shake the feeling Irving’s return may be nothing more than a side-effect of Henry’s claim on his soul.  After speaking with Jenny, the pair decide to pursue every possible course of action. Abbie attempts to contact Crane, in hopes that Katrina would be able to assess Irving’s spiritual state, while Jenny heads off to obtain some demon slaying bullets from a buried corpse.

At the historical center, the Crane’s witness the curator being pulled into the painting by Colby’s wicked will and it is then they notice a major detail hidden not in the painting itself, but in its frame.  Runes inscribed by Katrina’s own coven are built in there with the sole purpose of containing Colby.  Combined with some secret documents of Abigail Adam’s, Katrina learns of her long lost friend’s struggle against this killer and vows to end him once and for all.  Finally uniting in strength and purpose, Katrina invokes a spell for her and her husband to plunge in the painting and face down this foe.

Once inside, they tread carefully and find the curator barely alive, his blood used to complete Colby’s dark ritual.  As this terrifying figure rises from a pool of blood, eager to wreak havoc in the world once more, Katrina uses her abilities to whisk herself, Ichabod, and the curator to safety.  But Colby is right behind them, bloody scalpel in hand.

Right at the darkest moment, Abbie Mills arrives with a clip full of demon slaying rounds that she unloads right into the painting at Ichabod’s insistence.  Score another win for the Witnesses.

The deadly encounter behind them, Ichabod and Katrina share some tender moments reminiscing over their past and how fate has brought Katrina from one Abigail to the next.  Despite some residual tension between them, the couple appears to be on the mend.

And the good news doesn’t stop there. When Abbie returns to the station, Reyes compliments her on the dedication she has had towards Irving and how evidence has just arrived which could cause Frank to walk free.

Whether this truly is good news, or the work of Henry Parish remains to be seen…

The CW Is Developing The “Biopunk” Sci-Fi Series ‘The Avenger’

Watch The First Episode Of Syfy’s ‘The Expanse’ Right Here!