Tensions start high for Abbie and Ichabod, as they stumble in their attempts to uncover secrets buried within the recently obtained journal of Grace Dixon.  A message from Katrina via a mirror reveals our heroes know there is a weapon they must seek which can aid in Moloch’s downfall.  But how it will do so and where it lies is shrouded in mystery, and Katrina rushes off before she can provide any assistance. 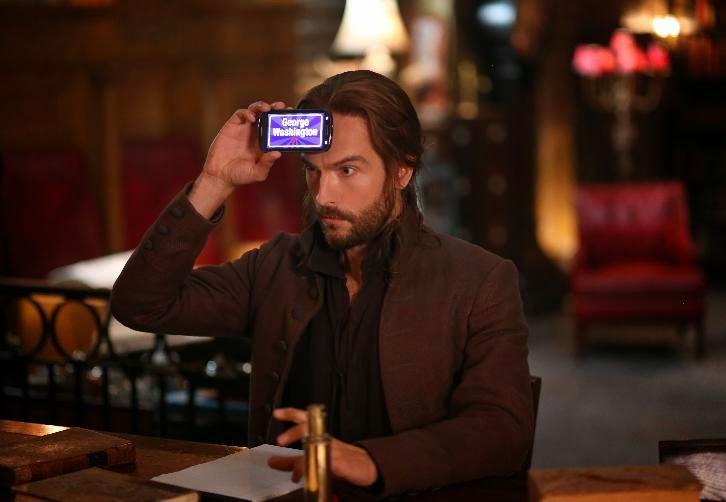 Shortly after, Ichabod makes a break in the case when he solves a puzzle hidden within Franklin’s propaganda cartoon ‘Join or Die.’ This break leads them to a nearby river where the pair believes they will find the sword of Methuselah, an ancient Hebrew weapon that is said to have slain over a thousand demons.  Perfect for taking out a rising overlord!

Unfortunately, Katrina’s contacting them was secretly orchestrated by Henry to listen in on their plans.  Now the Headless Horseman is en route as well, and it quickly becomes a heated race to see who will locate the sword first.

Meanwhile, Jenny is making her way north with Irving in an attempt to get him across the border to Canada before the authorities can catch up with them.  Thanks to a heads-up from Abbie, and Jenny’s own resourcefulness, the pair is able to take inventive methods in getting around a police roadblock. But Irving isn’t one to just run away, especially with a clear conflict building on the horizon. So instead, he instead decides to hide away in New York until the time he is needed.  Seeing how this is the first of a two part fall finale, the good bets are on ‘next week.’

At the sword of Methuselah’s lair, Abbie and Crane have a close encounter with the Headless Horseman, only to be saved by their enemy’s kryptonite: the sun.  With ample time to find the sword, they rush in, only to find a gorgon impeding their path.  Confronted with a creature that has turned countless adventurers to stone (even an ancestor of Abbie is among the monster’s collection), it doesn’t take Crane long to realize they have the perfect foil to challenge the gorgon.

All they must do now is wait for the sun to set.

In this time, Ichabod begins to mull over the events of his life and how most of the time the path he has taken was one chosen for him by others close to him.  This introspection comes about due to Crane’s concerns over a prophecy saying only those that truly know themselves can wield the sword.  With the arrival of darkness, the call to action arrives, and Abbie’s plan to use Headless as bait works quite well.

They make haste to the sword’s chamber and find themselves confronted with a small room just chock full of swords.  Leaving the choice up to Abbie, Crane falls back to confront the Horseman and buy his partner time.

Due to enchantments placed on the building, Ichabod is able to see the Horseman not as his normal headless self, but as his old friend Abraham.  A lengthy sword match/word duel quickly commences.  Crane ends up cornered and falls back to check on Abbie just as she makes a choice.  As she touches one, all the swords turn into snakes and scurry off the exact moment before Abraham sticks his headless self into the room. After a large amount of grandstanding on Abraham’s part, he seems ready to finally do Crane in, but the Shofar is sounded and the Horseman must be at his master’s side.  Feeling destitute over this turn of events and his own willingness to die, Ichabod worries they will never find the sword and Moloch will win before they can even put up a fight.

Abbie comes to the rescue, of course, and shows that they see one another best through the eyes of the other.  This little pearl of wisdom causes the duo to realize how to uncover the weapon.  And right in time too, as the scene changes to show the two Horseman gathered outside the manor to greet their master.

All the pieces are in place, weapons in hand, and inner conflicts mostly resolved. Now all that is left is to see where they fall!