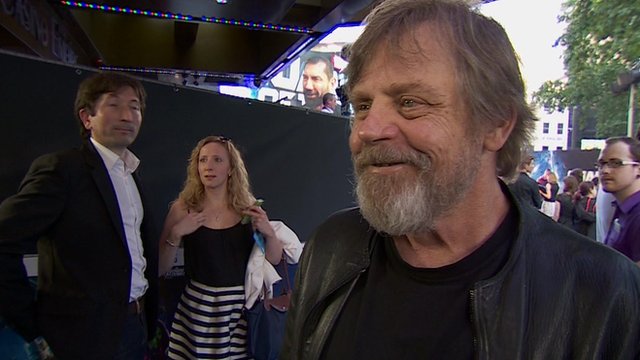 At the ‘Guardians of the Galaxy‘ premiere, there was a beard covering up a very familiar face walking the red carpet as Mark Hamill was on hand to show support for the latest science fiction themed space opera. While there, he had some time to talk a little about ‘Star Wars Episode VII‘ and did a great job at both giving away information while keeping us spoiler free.

During the interview, Hamill expressed how very “astonished’ he was to be back on the set:

“It’s certainly unexpected. We had a beginning, a middle and an end – I never thought we would come back.”

While most of us didn’t either, I think we all want J.J. Abrams to do something amazing while using the original cast to build a Jedi filled future.

One key phrase that can be over analyzed is when Hamill mentioned that he “still can’t believe it’s happening and to go on to those sets that evoke so many memories, is just astonishing.” It makes you ask how many of these sets are going to be bringing back classic scenes from the original trilogy to the new film? We all know that the Millennium Falcon will be back, but what else are we going to be seeing again?

Hamill went on to say:

” [‘Star Wars: Episode VII’] really has the spirit of that whole [Star Wars] universe, in other words, the characters are so relatable and I think that’s the most important thing because no matter what kind of special effects you have, the audience has to be able to identify with each of the characters.”

It sounds like they might be relying on some of the feel of the original films and that is okay with me! Not everything will be the same, though, as Hamill explains that the writers “have done a great job in writing a script where you immediately understand where these people are and relate to them.”

The important note that Hamill seems to make, however,  is that while the original actors are going to be in the film, he makes it clear that there is a new generation in this ‘Star Wars’ story:

“It’s really about the new generation of characters. We’re just there to lend our support, and grow contractually obligated beards.”

With both Solo and Doctor Jones in his past, I think Ford has a little experience in taking a tumble and running with it.

With Hamill’s current look, I feel we’re going to be getting more of a mentoring Obi Wan Kenobi styled character over the adventurous Skywalker of his youth. Of course, with 30 years having gone by and not being a lead that would make sense.

You can check out the full interview over at the BBC site.

Dear Patty Jenkins, From A Parent: Thank You For ‘Wonder Woman’

Ash Remains: Check Out the New Trailer for Starz ‘Ash Vs Evil Dead’ !