With my “New Year, New You” series, I am examining cartoon series that were based on live-action series.  As I mentioned previously, the trend of turning primetime shows into cartoons is a little odd, in that most of the time, the live-action shows were already popular with children, however in the case of this week’s feature, the live-action series had been canceled, so the cartoon allowed the property to continue.  And that subject is ‘The Partridge Family 2200 AD’. 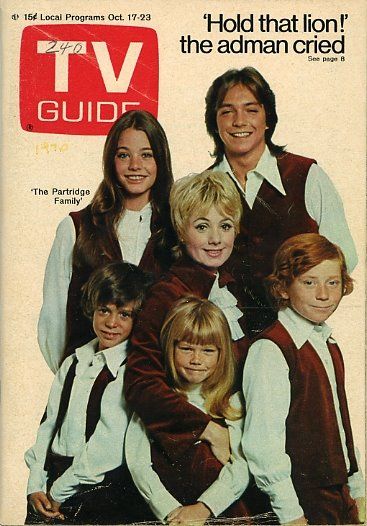 ‘The Partridge Family’ aired for four seasons from 1970 to 1974 and showcased a family of one mother, Shirley (played by Shirley Jones) and her five kids, Keith (David Cassidy), Laurie (Susan Dey), Danny (Danny Bonaduce), Chris (Jeremy Gelbwaks in Season 1, Brian Forster after that) and Tracy (Suzanne Crough).  The kids performed as a traveling rock & roll band, with Keith singing lead and playing guitar, Laurie usually on keyboards, Danny on bass, Chris on drums, and Tracy on tambourine.  Mom Shirley would also play keyboards.  The family traveled around in a bus painted in a colorful patchwork design.  Dave Madden co-starred as the band’s manager, Reuben Kincaid.

The Partridge Family’s song “I Think I Love You” was a #1 hit in 1970 and the fake band was nominated for the Grammy Award for Best New Artist.  However, only Cassidy and Jones actually sang on the recordings.  The other singers and musicians were studio hires.  The rest of the TV cast would only pretend to play their instruments and sing on the show and in other “live” performances.

Altogether, they scored seven Top 40 hits and three Top Ten albums.  The first five ‘Partridge Family’ albums went Gold in the US.  The TV series itself was nominated for the Golden Globe for Best Comedy twice, and David Cassidy remains one of the most fondly remembered teen idols of the ’70s.

‘The Partridge Family’ is often compared to ‘The Brady Bunch’, and like the kids from the latter series, the younger members of The Partridge Family entered the world of animation.  (‘The Brady Kids’ was produced by Filmation and aired on CBS from 1972-73.)  The Partridge Kids became regular guest stars on the Hanna Barbera series ‘Goober and the Ghost Chasers’ one of the multiple cartoons produced by the studio in an effort to mimic the success of their own ‘Scooby-Doo, Where Are You?’.  The Partridge Kids appeared in eight episodes of ‘Goober’, with the original actors providing the voices for their cartoon counterparts.  That series began airing in 1973.

Then, on September 7, 1974, following the cancellation of the live-action sitcom, ‘The Patridge Family 2200 AD’ arrived on CBS Saturday mornings.  With absolutely no explanation whatsoever, the family now lived in the far future, which very strongly resembled the environment inhabited by the earlier Hanna Barbera characters, The Jetsons.

There’s a reason for that.  HB originally intended for this series to be an update of ‘The Jetsons’, which would focus on the kids, who were now older– Elroy as a teen, and Judy as a young adult.  But CBS rejected the idea and instead the show morphed into this bizarre adaptation.

Check out the opening credits and you’ll definitely spot the close resemblance to ‘The Jetsons’:

Over the course of the live-action ‘Partridge Family’, the young cast members noticeably grew up and their appearances on ‘Goober’ reflected their ages at that time, but on ‘2200 AD’, they looked younger, more like how they appeared when the sitcom first began.  This especially noticeable with Danny, who was a mid-teen by the time the sitcom ended but looks like a chubby almost-toddler on ‘2200 AD’.

Instead of the patchwork bus, the family cruised around in a Jetsons-style flying car with a dome top, painted in a similar colorful pattern.  On the live-action show, they were a small band looking for a big break, but on ‘2200 AD’, they were established superstars throughout the galaxy.

Danny Bonaduce, Suzanne Crough, and Brian Forster voiced their respective characters.  Susan Dey voiced Laurie for the first two episodes, but then departed and was replaced by Sherry Alberoni.  Cassidy, Jones, and Madden didn’t participate at all.

Chuck McLenan provided both the speaking and singing voices for Keith, with Joan Gerber as Shirley, and John Stephenson as Reuben.  While Reuben was a major character on the sitcom, he had a minor role on the cartoon and didn’t appear in every episode.

However, in this incarnation, the family was accompanied by a robot dog named Orbit, voiced by the legendary Frank Welker, a blue and green Martian named Marion (Julie McWhirter), and a purple-haired, blue-skinned Venusian, Veenie (also Welker).

While The Partridge Family was an imaginary band made for a TV sitcom, they weren’t the first or most successful.  That honor goes to The Monkees, and one Monkee, Mickey Dolenz, has done extensive voice work, including characters on ‘2200 AD’, including Wonderful Wayne and Spotless Sam.

Like the sitcom, each episode featured musical performances, but I am not familiar with the music of The Patridge Family, so I don’t know if these were new songs, or reuses of their previously released music.  But since McLenan is credited with providing Keith’s singing voice, if these were older songs, he must have re-recorded the vocals.

‘The Partridge Family 2200 AD’ only lasted for one 16-episode season, and all 16 episodes aired by the end of 1974, and were rerun after that.  Starting in 1978, episodes were edited into the syndicated weekday HB package ‘Fred Flintstone and Friends’, but these segments were renamed ‘The Partridge Family in Space’.

Unfortunately, because this cartoon was based on the live-action sitcom, produced by Screen Gems, Hanna Barbera (now owned by Warner Brothers) doesn’t hold the rights to it anymore.  Two episodes were remastered and released as extras on the 2005 DVD set of ‘The Partridge Family: The Complete First Season’.  Nowadays, it appears a company called CPT Holdings owns the rights to ‘2200 AD’, so it’s unknown if this series will ever be seen in its entirety again.

Were you a fan of either the live-action or animated ‘Partridge Family’?  How did the cartoon live up to the sitcom?

Netflix Orders A Third And Final Season Of ‘Lost In Space’