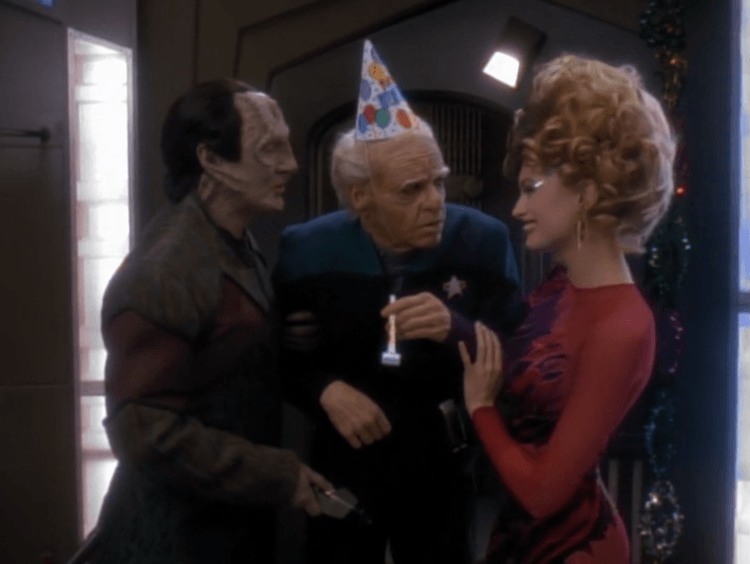 Fortunately, when Bashir fell, Garak was nearby. The Cardassian tailor agrees to help him to Ops, though not before wondering aloud how he expects to fix the station when he can hardly walk. The two finally arrive in Ops, and this is where things get weird.

The room is decorated for a party, and a Dabo girl appears, singing ‘Happy Birthday’ to Bashir in the style of Marilyn Monroe with Garak joining in. When the song ends, Bashir opens a panel to fix the station, but instead of computer circuitry, it’s full of tennis balls which bombard his decrepit frame as they tumble out.

As Garak drones on about how hopeless Bashir’s situation is, the doctor demands to know who he “really is,” and Garak reveals himself to be the Lethean. The newly revealed Lethean taunts Bashir until he manages to hobble into a turbolift. The lift deposits Bashir in the infirmary, where a confused Lethean soon follows. Newly emboldened, Bashir explains that while Ops is the center of the real world, the infirmary is the center of his world. With that, he opens a panel, fixes the computer, and traps the Lethean in a quarantine field, which he then sterilizes.

With the Lethean defeated in his mind, Bashir awakes in the real world, where he learns that the real Lethean hit him with a telepathic attack (which is nearly always fatal) before tripping a security alarm and being taken into custody by Odo. Over lunch the next day, Bashir admits to Garak that after experiencing life at a hundred-plus, suddenly thirty doesn’t seem so bad. Garak, though, is more interested in what Bashir’s experience says about their relationship, as it would seem to suggest that Bashir still doesn’t trust him. As Bashir tries to spare his friend’s feelings, Garak.proudly adds that there’s hope for him yet.

Right out of the gate, this one stands out from the pack. While ‘Deep Space Nine’ never was never as brightly lit as, say, ‘Next Generation’, for ‘Distant Voices’ they turned the lights down and shot the whole thing (or the “coma dream” sequences anyway) like a horror movie. It all gives the episode a distinct look and feel. And that’s before it starts indulging dream logic with the Dabo girls and tennis balls and so forth following the mid-episode reveal. While it never goes full ‘Nightmare on Elm Street’ in that regard, it’s a nice touch and the sort of surreality that you don’t usually get to see on ‘Star Trek’. And speaking of nice touches, there’s also Bashir’s rapid aging. Not only is it an extension of both the fact that he is slowly dying over the course of the episode, it also (of course) ties into his early anxiety over hitting the big three-oh. The old-age makeup – which can be hit or miss – is y and large quite well done here, so much so that it won the show an Emmy. And on top of all that, the aging element allowed them to use a broken hip as an act break. I don’t know if I’ve ever seen another show do that.

In a more nuts-and-bolts sense, it’s also a clever way to do a bottle show. Sure, it’s fair to point out that when the story is set in a character’s mind they could literally film anywhere, but with the realities of TV production being what they are? You can film an episode like this anywhere, including on your standing sets. Plus, it lets you break from the established geography or fill a computer terminal with tennis balls. You know, fun stuff.

As I mentioned earlier, Bashir got off to rather a rough start in the first season. Though the character’s ship had been righted by the time ‘Distant Voices’ came along, that rocky start did mean that in some ways he had been a beneficiary of the show’s penchant for character development in ways that many other’s hadn’t been, if only because he’d needed it more. That ‘Distant Voices’ focuses so tightly on Bashir – so much so that nearly every conversation he has in the episode is quite literally with himself – allows them to put three years of character growth on full display. And that works to spectacular effect, not just because of how far Bashir’s come but how far he’s yet to go, as some of the material in this episode dovetails nicely with revelations about his background that the writers were still years away from devising.

What do you think of ‘Distant Voices’? Let me know in the comments, and as always, be sure to check back in two weeks for the next ‘Final Frontier Friday’!

‘Legends Of Tomorrow’ Holds Up; ‘Arrow’, ‘Supergirl’ And ‘The Flash’ See Ratings Drops For Season Premieres