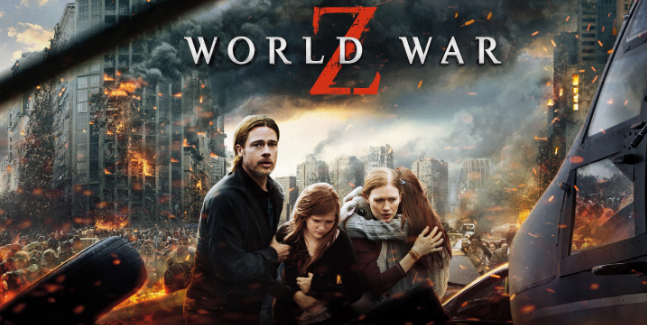 2013’s ‘World War Z‘ was a breakout in the genre because it was really the first zombie movie that was a mainstream hit.  Don’t get me wrong, I’m not saying it was the first “good” zombie movie — it was just the first one that made critic and average movie-goers pop their heads up and pay attention like a field full of meerkats.  Plus Brad Pitt still has what it takes to make both teams swoon!

Zombies movies have been around since George A. Romero kicked things off with ‘Night of the Living Dead.’  There have been countless zombie flicks since then, some good, most not great.  And let’s not forget our love-hate relationship with AMC’s ‘The Walking Dead,’ now in its 10th season!

Yet, when ‘WWZ’ hit the scene, the general public, those zombie virgins, finally realized that stories about the walking dead could be more than just gore and “Braaaains!”   It was exciting and scientific(ish), it had romance, a strong family theme, and pretty impressive crowd CG for the time (remember the flood of zombies coming over the walls of Jerusalem?!).  For those of who’ve been zombie fanatics for a while, it was kind of fun to have that little twist [SPOILERS INCOMING] where zombies didn’t care about you if you had a terminal disease. Therefore, it was with some excitement that we first heard that Pitt was in talks to try to get a sequel made.  He was planning to produce and star in the film, in coordination with David Fincher (whom we know from ‘Se7en,’ ‘Gone Girl,’ and ‘The Social Network.’).   And yet, not every story has a happy ending as last February the sequel was been relegated to the “circular filing cabinet” full of neat ideas (it was trashed).

In a recent interview that Pitt was in while promoting his new movie, ‘Ad Astra,’ the topic of the ‘WWZ’ sequel came up.  He lamented the loss of his opportunity to create it with Fincher:

“We had really good story, which he shepherded, really strong story. The things he had planned for it just hadn’t been seen yet. I’m sure he’ll get it out on something else.”

I for one am mourning the loss of this idea probably more than I should.  I just can’t help but imagine the love child of ‘Se7en’ and ‘WWZ.’  Can you imagine how amazingly dark, twisted, and gut-wrenchingly deep that story could have been?!  Let’s hope that Pitt and Fincher find some way to collaborate on something similar to what ‘WWZ2’ could have been!