Welcome back to ‘Final Frontier Friday’! Last time out, we saw how the original ‘Star Trek’ ended, this time we’re turning our gaze back toward the beginning (in more ways than one) as we take a look at the first season episode ‘The Galileo Seven’.

As conceived by writer Oliver Crawford, ‘The Galileo Seven’ is essentially a sci-fi variation on the 1939 film ‘Five Came Back’, which followed the survivors of a plane crash in the Amazon. It also marked the first time that Spock served as more of a driving force in a ‘Star Trek’ story than Kirk. Though it was still early in the series’ production run, Spock’s popularity was already apparent, to say nothing of the writers’ interest in exploring the Enterprise’s resident alien. Putting him in the driver’s seat for an episode, then, was only logical. More important, though, at least to me, is my personal history with ‘The Galileo Seven’. You see, this was my introduction to the original series. I was born a few days before the premiere of ‘Star Trek: The Next Generation’, and since my parents are both casual fans, it wasn’t uncommon to have episodes on around the house. So I was certainly aware of ‘Star Trek, quite probably for longer than I can actually remember. There are even a handful of episodes that I can remember seeing in this period (‘Darmok’ comes to mind, if not first run then in a very early rerun). But it wasn’t until the summer of 1994 when my mother sat down with me to watch a daytime rerun of the original series that ‘Star Trek’ really got its hooks into me.

So if anything I’ve written here over the years has pissed you off, you can probably blame her.

Anyway, the first episode I saw that summer was ‘The Galileo Seven’. I don’t remember much about my in the moment reaction to the episode, except that I really liked Spock. Never underestimate the power of Leonard Nimoy, I suppose. But in any event, something clearly resonated and my early ‘Trek’ fandom only snowballed from there. On top of those reruns, my parents rented the first five movies from our neighborhood video store (Remember those?), and from there I just devoured anything I could get my hands on. The nineties were also an amazing time to be a young ‘Star Trek’ fan. Sure, I can’t help but be biased by my own perspective, but think about it for a moment. At the time, there was a constant stream of new ‘Trek’ both on TV and at the movies. That’s great for any fan. But that stream brought with it a steady supply of merch, which for a kid means one thing: toys. Playmates had the ‘Star Trek’ license at the time, and boy did they make the most of it. The sheer volume of ‘Star Trek’ toys at the time rivaled that of ‘Star Wars’. My Toys R Us, at the time, had an aisle, given over to the two, ‘Trek’ on one side, ‘Wars’ on the other. At no other time in before or since would I have been able to say that, and it was glorious. But we have an episode to talk about! So let’s get on with that before I get any more lost in the weeds of nostalgia!

While on a mission to deliver medical supplies to the New Paris colony, the Enterprise diverts to conduct a study of Murasaki 312, a quasar-like phenomenon that encompasses four star systems. Though Galactic High Comissioner Ferris objects, given the increasingly dire situation on New Paris. Kirk, however, reminds him that the Enterprise has standing orders to investigate these sorts of phenomena, and besides, their delivery rendezvous isn’t scheduled for several days, leaving them plenty of time for a survey mission. To examine the quasar, Spock takes the shuttle Galileo with a survey team consisting of McCoy, Scotty, Yeoman Mears, and Lieutenants Latimer, Gaetano, and Boma. As the mission gets underway, the Galileo is blown off course. With interference from the quasar disrupting both sensors and communication, Kirk must race against the clock to find and rescue the Galileo crew. The shuttle manages to set down on Taurus II, a planet near the heart of the phenomenon. While Latimer and Gaetano scout the area around the landing site, Scotty assesses the damage. Back on the Enterprise, Kirk and Ferris begin butting heads as it becomes clear that Kirk has no intention of abandoning the search unless and until he has no other option. Scotty, meanwhile, has determined that he can get the Galileo airborne, but they’ll need to lighten the load by about five hundred pounds if they’re to make it into orbit. Spock grimly points out two facts: very little of the equipment on the shuttle is dispensable, and five hundred pounds is the approximate weight of three crewmen. Boma is particularly unnerved by Spock’s cold demeanor in the face of this dilemma (though he’s hardly the only one) and suggests drawing lots to determine who stays behind. Spock however, insists that they are better off with him making the choice rather than leaving it to chance. As if the situation wasn’t bad enough, Latimer and Gaetano are attacked by a giant, spear-wielding native, and Latimer is killed.

Spock and Boma find Gaetano hunched over his fallen comrade, having driven the creature off. As Spock examines the spear, Boma and Gaetano decide to take Latimer’s remains back to the shuttle. Spock agrees, as it is unlikely to interfere with the repairs. They refuse Spock’s offer of help. Back at the shuttle, McCoy and Mears have managed to remove over a hundred pounds of non-essential equipment, though it’s’ still not enough. As it stands, they’ll still have to leave one man behind if they’re to have any hope of reaching orbit. Their argument over the ethics of this decision is interrupted by Boma, who informs them that they are ready for Latimer’s funeral. Though Spock tries to leave McCoy in charge, the doctor insists that it’s his responsibility as commanding officer. As repairs continue, a fuel line ruptures, leaving them without a means of propulsion. They soon find that the Taureans are preparing to attack. Boma suggests that if they can hurt one, they may scare the rest off. Spock  concedes the logic of the plan, but insists that they try to scare them off without harming them. The plan appears to succeed and the team returns to the shuttle, where Scotty has devised a way to power the shuttle by draining their phasers. Though it will leave them defenseless, they have no alternative. Meanwhile, the Taureans prove more persistent than expected and Gaetano is killed while standing guard. 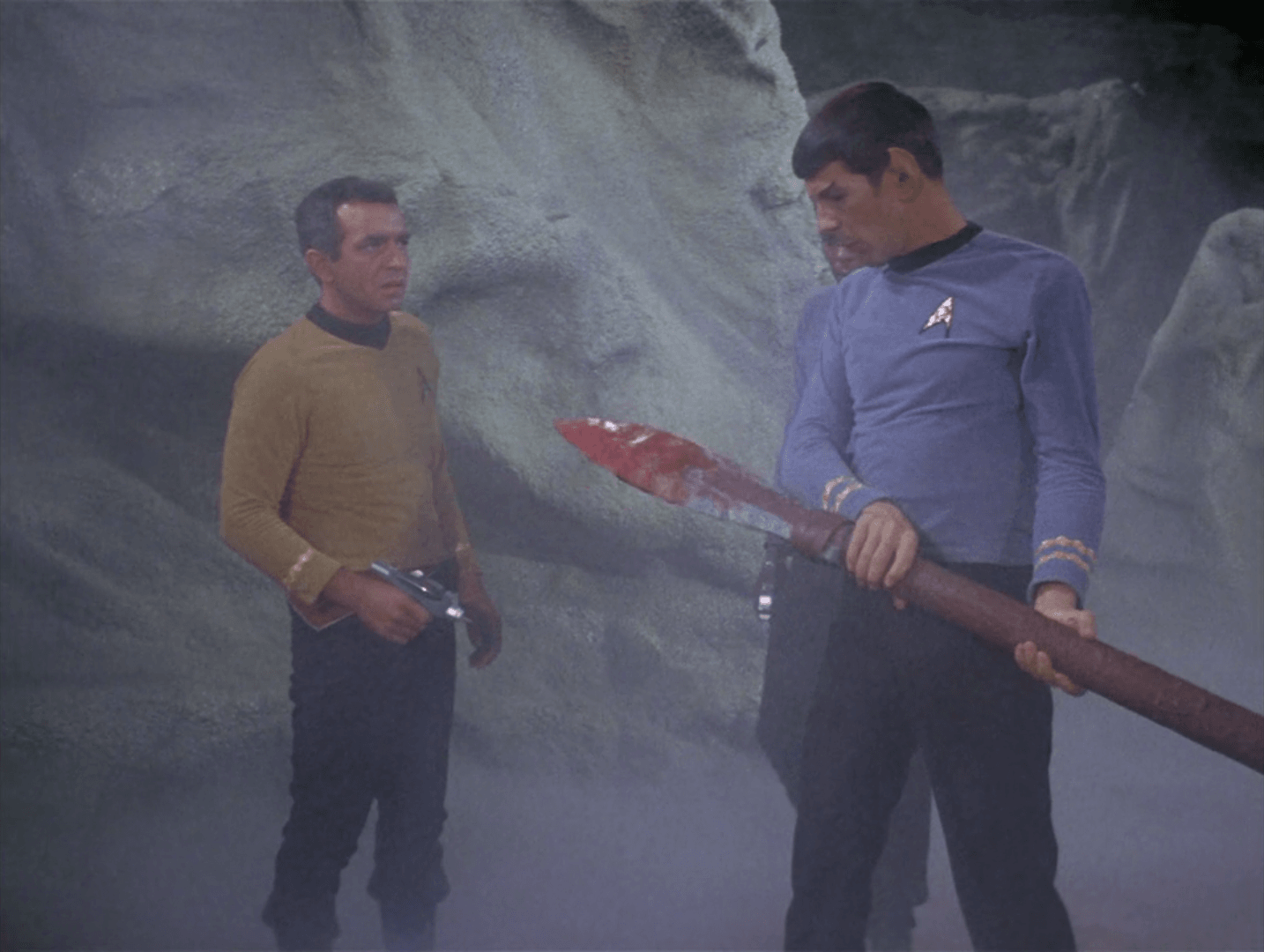 Spock, McCoy, and Boma search for Gaetano but find only his phaser, which Spock orders the others to take back to the shuttle, along with his own weapon. Now alone, Spock sneaks up to a group of Taureans who have gathered near Gaetano’s body. They notice Spock as he picks up the body, and he barely makes it back to the shuttle in one piece. Having followed Spock, the Taureans begin bombarding the craft with rocks. Spock muses aloud that logic has failed him, both in predicting the creatures’ behavior and in his failure to anticipate the crew’s resentment. They eventually drive off the creatures by electrifying the hull, and despite some initial resistance, Spock agrees to perform a funeral for the dead crewmen. On the Enterprise, Kirk remains at loggerheads with Ferris, who invokes his authority to assume command of the ship. Reluctantly, Kirk orders the search parties to return and sets a course for the rendezvous.

Uhura reports that the last of the search teams will be back within twenty minutes. On the surface, Scotty finishes draining the phasers. They have just enough power to maintain orbit for a few hours. He sets about preparing for the launch, and Spock gives McCoy and Boma ten minutes to bury their dead (with his help). The burial, however, is interrupted by another attack. Spock is pinned by a boulder and orders the others to leave him behind. Instead, they help him get free and return to the shuttle. As they take off, the Taureans try to physically hold the ship down, though they are able to break free.  Upon reaching orbit, they begin to pursue the Enterprise, though the increasingly distant starship has yet to notice them. In an act of desperation, Spock jettisons their remaining fuel and ignites it. Sulu notices and the Enterprise reverses course to retrieve them. With their crewmates safely aboard, Kirk orders Sulu to resume course to their rendezvous. This is a damn good one. Despite my own experience, I don’t know if it’s one I’d use to introduce someone to ‘Star Trek’, but as I’m sure you’ve noticed by now, I’m also prone to overthinking that sort of thing. But whether or not it’s an introductory episode, ‘The Galileo Seven’ is a tense, tightly-paced, largely character driven piece that practically sails by. Like most episodes of the original series, this one clocks in at roughly fifty minutes. But it sure doesn’t feel like it.

I mentioned earlier that I was, if you’ll pardon my choice of words, fascinated by Spock on first seeing this episode. A quarter of a century on, I can only guess what it was that so resonated with me, but it’s certainly not hard to see why Spock would stand out here. It is, after all, largely his story. More than just his story, it’s a pretty decent Spock episode. There would be better ones (this season alone includes ‘This Side of Paradise’), but given that this is the first time he was really at the forefront of an episode? It’s a hell of a start. In fact, I sing Leonard Nimoy’s praises a lot around here, but I think I can safely say that his performance does a lot to elevate the episode. That’s not to discount the script, which does give him some strong material to work with, but it’s his performance that sells many of its finest moments, particularly toward the end.

But speaking of the script this is some great character material. This is the first time (at least in the course of the series) that Spock is placed in a command position in a crisis. And as he himself notes, he makes the wrong call at nearly every turn. In fact, Spock will on numerous occasions throughout the run of the series indicate his lack of interstellar in command. While that could just as easily be a reflection of his professional preference for scientific work, one can’t help but wonder if his experience led on Taurus II had anything to do with that. In fact, if anything, ‘The Galileo Seven’ illustrates that Spock – for all his talents – wouldn’t be particularly well-suited to the captan’s chair. While he could and probably would learn to do better over time, the recurring clashes between Spock’s unemotional demeanor and the seeming insensitivity that creates to the needs of those under his command illustrates s fundamental weakness in his performance in a command position. But it’s not all about Spock. I also enjoy the constant sparring between Kirk and Ferris. Because as odious as Ferris can be, he’s not wrong. They’re in a terrible situation, with the conflicting demands of Ferris’s urgent rendezvous and Kirk’s missing men. But it’s one they’re only in because Kirk had to investigate the quasar NOW. That creates a contrast to the usual dynamic we’d see in this sort of story, which would place Kirk – the hero – firmly in the right, with the bureaucrat as a thorn in his side (think ‘The Trouble With Tribbles’).

What do you think of ‘The Galileo Seven’? Let me know in the comments, and as always, be sure to check back in two weeks for the next ‘Final Frontier Friday’!