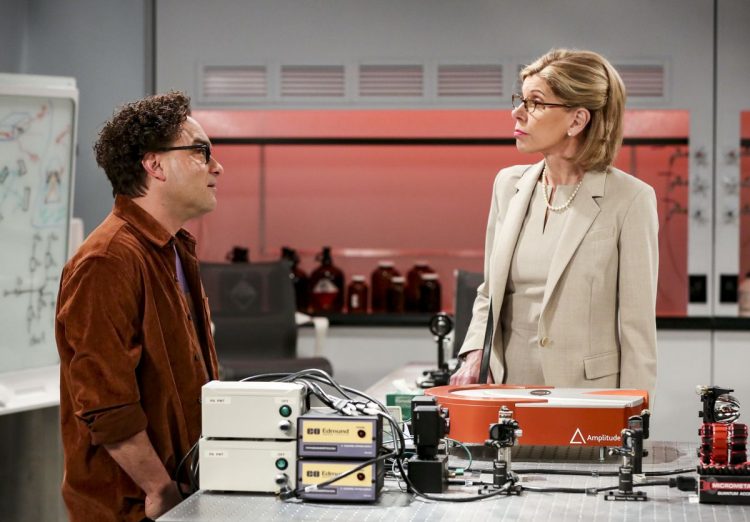 Well, we are down to the final 3, and I was pleasantly surprised to actually have a decent episode this week. Plots are moving forward, good jokes are being written, and the episode even managed to include some emotional moments, and actual story-lines for Raj and Leonard. Perhaps they really were holding back until the final 3 episodes.

Jumping in, the main story of the night revolved around Leonard’s mother coming to town to visit, which is always a stressful situation for him. Only this time she seems to genuinely want to be around him, even agreeing to stay with him and Penny and visiting him in his lab and seeming interested in his work, even to the point of ignoring Sheldon (which of course angers Sheldon).

Of course, later he and Penny find out Leonard’s mom is doing a book about how parental styles affected her children. Leonard connects the dots that all her kindness this visit was all about research, and he blows up at her for being a bad mom. He then flees to Sheldon and Amy’s apartment seeking counsel, though Sheldon still has trouble being empathetic, even with Amy’s help.

Eventually, Leonard speaks to his mother, intending to yell at her for everything she has done, but decides that in the end, she is never going to change, so he instead chooses to forgive her for everything. She is genuinely touched by his words, and they have a moment, completely without words, which ends with an emotional hug between the two of them.

The secondary story revolved around Raj and Anu as she has gotten a job offer while at a conference in London and their relationship is now in jeopardy. Raj decides he is going to fly to London to propose and is willing to move to London to be with her if she says yes. Of course, this does not sit well with Howard and Bernadette who do not think Anu is the right woman for their friend, so Howard rushes to the airport to stop Raj. At the gate, Raj finally has a big romantic moment, only it is with Howard, as his friend assures him the right woman is still out there for him, and he should stay in LA with his friends and the people who love him. The crowd claps and cheers as Raj agrees to stay and while they walk out, Howard assures everyone their relationship is not what they think.

Also, amidst the Raj drama, Howard and Bernadette notice that Stuart has been having his girlfriend stay over almost every night. Howard asks Stuart to take it to her apartment, but we later find out her apartment has a super-awkward roommate in it, which she says is technically Stuart’s fault since she asked him to live with her and he declined. Eventually, they decide to move in together for real, and while asking her roommate to leave, they also say “I love you” to each other for the first time, a moment only marred by the weird roommate asking them to say it to him as well.

PENNY: (to Leonard) Never? Isn’t that when you usually go to the gym?

RAJ: How come we never eat in the dining room?
BERNADETTE: Oh, that’s for company.
RAJ: (Pause) Oh, what am I?
HOWARD: Apparently a guy who wants to have his feelings hurt.

STUART: Hey when I moved in you and Bernadette said it was ok if I brought girls over.
HOWARD: We were making fun of you!

HOWARD: I thought you gave her the ring the first time you got engaged.
RAJ: I did, but then I took it back.
HOWARD: (Pause) So you’re an, indian, giver.
BERNADETTE: Howie!
HOWARD: What? He’s gonna move to England, I gotta get these out now!

AMY: It’s an emotionally complex issue, I don’t have time to explain it right now!
SHELDON: Well ok! But that excuse is running out of steam!

All in all, not a bad episode at all, with the Raj and Anu plotline being settled (though it makes me kind of sad for Raj as he is pretty clearly now going to finish the series alone), Leonard finally making peace with his mother, and Stuart taking the next steps with his girlfriend and becoming more confident and happy. Plus, the episode seemed very well written, with jokes that actually landed and worked for the characters. Perhaps I can rekindle my hope that the series will end on a high note, as they only have two episodes left now, and are leading into the penultimate episode with the momentum from this week. We’ll find out soon!

See you back here for our second-t0-last review of ‘The Big Bang Theory!