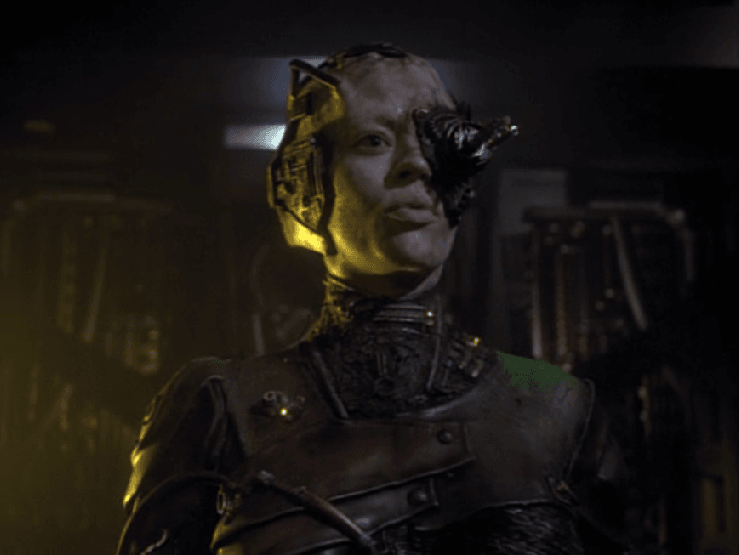 The Borg cube races away from the destruction of a planet at the hands of Species 8472, with Captain Janeway on board and Voyager held firmly in its tractor beam. As Voyager attempts to beam Janeway back from the cube, they receive a hail. It’s the captain, here to announce that she’s reached a deal with the Borg. Chakotay is less than thrilled by the news, as he trusts the Borg about as far as he can throw them. But Janeway’s mind is made up and the die is cast. Janeway adds she will stay aboard the cube to begin work on the weaponized nanoprobes per the terms of their deal and orders Tuvok to join her.

In sickbay, the Doctor is beginning to have some success in treating Kim, using a nanoprobe-based treatment that is serving as the basis of Janeway’s work with the Borg. Chakotay congratulates the Doctor and returns to the bridge, where Torres reports that Tuvok has joined Janeway on the cube. Chakotay orders her to maintain a transporter lock on the two, despite the Borg’s ability to block their transport attempts, and further instructs her to find a way to pull their people out of necessity. Kes, meanwhile, continues to receive telepathic visions from Species 8472 and realizes that they’re being watched.

Meanwhile, Janeway and Tuvok examine sensor data and determine that Species 8472’s ships are made of the same biological material as the aliens themselves, meaning that they will both be vulnerable to the modified nanoprobes. As they brainstorm, a pair of drones suddenly force the two to their knees and begin to install temporary neuro-transceivers on their necks so that they can communicate without all of this “primitive” and “inefficient” speech. Suffice to say, Janeway objects, instead suggesting that a single Borg speak for the Collective (invoking the precedent of Jean-Luc Picard and Locutus). The Collective considers this and accepts. A nearby door opens, and a female drone joins them.

The spokesdrone introduces herself as Seven of Nine, Tertiary Adjunct of Unimatrix Zero-One. As the three discuss delivery systems for the nanoprobes, Seven insists on a weapon of mass destruction. Janeway balks. It’s not just the ethical implications, but the simple fact that the time required to produce and modify enough nanoprobes for such a weapon is not time that the Borg can spare. Though Seven is initially dismissive, the Collective clearly has other ideas and the Borg call up Voyager’s photon torpedo specifications (to the surprise of the Voyager officers) and begins modifying the designs to accommodate nanoprobe warheads.

Back on Voyager, Kes’s visions are getting worse. Not only are they more frequent and intense, they’re also more than simple messages: Now it’s as if the aliens are in the room with her. Based on the Doctor’s scans, they infer that Species 8472 is accessing her memories. Chakotay informs Janeway of this and Voyager and the cube change course.

As they proceed, Seven demands one of Voyager’s torpedoes and a sample of the Doctor’s modified nanoprobes. Janeway flatly refuses and after a tense standoff, Seven relents, returning to the schematics. Back on Voyager, Kim returns to the bridge just as a quantum singularity opens and an 8472 bioship emerges. Their suspicions about Kes’s memories are confirmed when the ship attacks Voyager rather than the Borg. The cube comes to their defense but is destroyed in the process, though it takes the bioship with it. The crew fears the worst, but soon a hail comes in from Cargo Bay 2. Apparently, the Borg managed to beam Tuvok, Janeway, and a handful of drones aboard before the cube was destroyed. Janeway, however, was badly injured in the attack. Though a little worse for wear, Tuvok’s injuries are treated and he returns to duty. Janeway’s condition is more serious, so much so that the Doctor has to induce a coma. Command falls to Chakotay, and before she is put under, Janeway reminds him that the Borg have no choice but to honor their deal and alliance and urges Chakotay to make the alliance work and get the crew home.

The commander wastes no time cordoning off the cargo bay, which has already been partially assimilated. Here, he introduces himself to Seven of Nine, informing her of Janeway’s condition and the fact that she’ll now be dealing with him. This relationship doesn’t get off to the strongest start. While Chakotay is willing to uphold the original agreement, Seven insists that Voyager rendezvous with a cube that happens to be five days in the wrong direction. Chakotay tells her he’ll think about it (in that way that immediately tells you the answer is “no”) and calls a meeting of the senior staff. He brings the crew up to speed and informs them that he intends to break the alliance, dropping the drones on an uninhabited planet with the nanoprobes before continuing on their way.

After the meeting, Seven is brought to the ready room where Chakotay informs her of his decision. She threatens Voyager with assimilation, and he responds by promising to vent the entire deck into space if the Borg take so much as a step out of the cargo bay before having her escorted from the room. Later, in sickbay, Chakotay speaks with the comatose Janeway, telling her of his decision and hoping she can forgive him.

Check Out The Opening Sequence For ‘American Gods!’