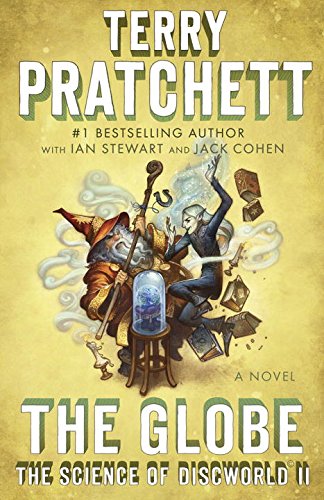 Long has Pratchett’s ‘Discworld’ series delighted readers with tales of an absurd and fantastic universe.  In this second part of ‘The Science of Discworld’, Pratchett teams up with science writers Ian Stewart and Jack Cohen, to show how a bit of that magic exists in our own world.

With an opening involving Wizards heading to Roundworld (AKA Earth) to investigate something called ‘humans’, ‘The Globe’ begins in the delightfully absurd fashion Pratchett is known for.  It doesn’t take long for the book to reveal itself as quite more than that though.

In the second chapter, the narrative shifts to a very detailed and highly thought out explanation of the science and history behind the story, while still maintain the breezy, fun tone that the rest of the book holds so well.

While this tonal shift between traditional narrative and in-depth exploration of scientific ideas can be a bit of a shock to one not expecting it, the switch also proves to be its greatest strength.  ‘The Globe’ manages to cover everything from the origin of human life on earth, to the birth of art, William Shakespeare, Elves, Wizards, time travel, and altering history with such brilliant effortlessness that  it all gels into a cohesive and exciting whole — which demands to be both read and enjoyed.

For anyone looking for something fresh or even more off the beaten path than Pratchett’s own ‘Discworld’ universe, one would be hard pressed to find a better pick than this, or any other book, in ‘The Science of Discworld’ series.