It’s one of the most memorable scenes in ‘Star Wars.’ One of Darth Vader’s minions, Admiral Motti, dares to mouth off to the boss and he gets choked out. While Motti didn’t die after Vader punished his “lack of faith,” he certainly kept his mouth shut after that. The scene also did a great job of demonstrating Vader’s powers to the audience, showing the guy meant business. 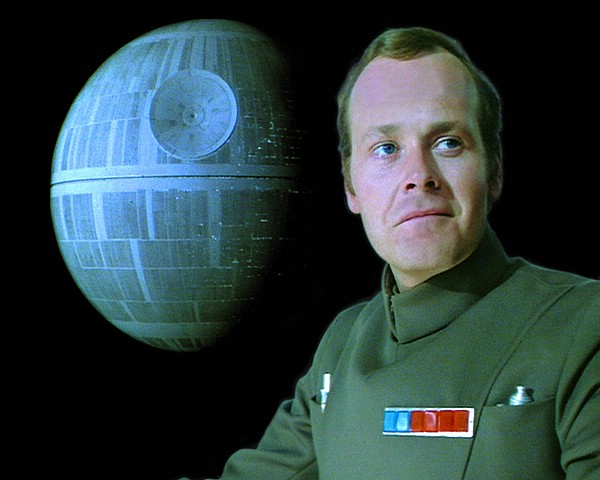 Still, you have to admire the cajones of Admiral Motti. Few among us would have the courage to tell Vader to stuff it, and it gave Richard LeParmentier a memorable moment in cinema history. LeParmentier just passed away at the age of 66, and he was an American born actor who also had roles in Rollerball, Superman II, Reds, and Who Framed Roger Rabbit, among others. (An interesting bit of trivia is LeParmentier was married to Sarah Douglas, who played villainess Ursa in ‘Superman’ I and II. LeParmentier and Douglas also starred together in ‘The People That Time Forgot.’)

Although Vader’s staff was primarily British, LeParmentier was born in Pittsburgh, and reportedly moved to England from the U.S. in 1974. Although his acting career pretty much stopped in the early 90s, he also wrote for several TV shows, as well as providing a voice performance for the 2004 video game ‘Soldiers: Heroes of World War II.’

LeParmentier told Reuters that he did the choking effect in the film “by flexing muscles in my next. I can’t do it anymore because, oddly enough, I have had an operation in my neck and had some 21st titanium joints put into it.”

Because of the popularity of ‘Star Wars,’ it created many actors careers, and reinvented veteran stars like Sir Alec Guinness and Peter Cushing. While some resented being typecast by Lucas’s space opera, it guaranteed everyone involved cinematic immortality. For several minutes, it even gave bit players like LeParmentier a great moment to shine, and he will definitely be missed.