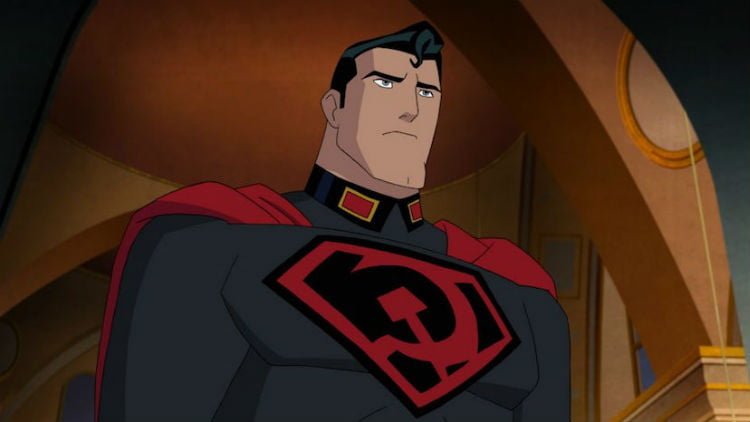 We’ve known about ‘Superman: Red Son’ for several months and now we’ve got the first trailer for the animated feature film. ‘Superman: Red Son’ is a fan-favorite “Elseworlds” DC story that tells the tale of a world where the Man of Steel crashlanded into the U.S.S.R. instead of Smallville, Kansas. Now, this iconic story by Mark Millar is coming to the small screen. We’ll likely get a one or two-night limited run through Fathom Events though it has yet to be announced.

The full trailer for the new animated feature described is below:

Imagine a reality where the world’s most powerful super-being does not grow up in Smallville, Kansas – or even America, for that matter…

SUPERMAN: RED SON is a vivid tale of Cold War paranoia, that reveals how the ship carrying the infant who would later be known as Superman lands in the midst of the 1950s Soviet Union. Raised on a collective, the infant grows up and becomes a symbol to the Soviet people, and the world changes drastically from what we know – bringing Superman into conflict with Batman, Lex Luthor and many others.

While live-action DC films are hit or miss, Warner Bros. has done a fantastic job with their animated features, and this is one that we can all get excited for. Fans also have a slew of voices to look forward to including Jason Isaacs as Kal-El, Amy Acker as Lois Lane, Diedrich Bader as Lex Luthor, Phil Morris as James Olsen, Phil LaMarr as John Stewart, Vanessa Marshall as Wonder Woman, Sasha Roiz as Hal Jordan, Roger Craig Smith as Batman, Paul Williams as Brainiac, and William Salyers as Joseph Stalin.

Watch How Stan Lee Would Have Ended ‘Star Wars’, ‘Inception,’ And More!