Listen To “Starcourt” From The Score Soundtrack To ‘Stranger Things 3’ Even though ‘Stranger Things’ takes place in the 1980s, its small-town setting has generally avoided the yuks of most films and TV series that have lampooned the Me Decade– no shoulder pads, pastels, parachute pants, or leg warmers.  Yet.  It looks as things are about to change, with the opening of the Starcourt Mall.  The citizens are no longer stuck shopping at the drab General Store where Joyce works.  Now they have The Gap, JC Penney, Claire’s, and Jazzercise!  We’ve already seen some of the impact– Eleven’s geometric-pattern romper, Hopper’s pink Hawaiian shirt.  But in the new trailer for the upcoming third season, we discover that Starcourt Mall will possibly be the most important location in the next chapter.  Wasn’t the mall the most important location anywhere in the ’80s?

RELATED:  Need A ‘Stranger Things’ Recap Before Season 3? The Cast Has You Covered!

Starcourt Mall debuted almost a year ago in a promo clip released by Netflix.  While the narrator points out the various businesses that shoppers can find, the entire clip is scored with a synthesized score that sounds like it was ripped right out of 1985.  Kyle Dixon and Michael Stein, two members of the electronic group S U R V I V E, scored ‘Stranger Things 3’.

One track that sounds nothing like the usual moody background music on the show is the bubbly “Starcourt” which you can listen to in its full 3-minute glory below:

In a statement, Dixon and Stein wrote:

“With the Season 3 soundtrack, we’ve made an album that doesn’t feel like a ‘score’ necessarily, but one that feels more like a stand-alone record than a collection of brief cues.  We’ve incorporated the main narrative elements of the series and stayed true to the original sound while at the same time expanding on our musical palette—we often pushed it to the limit. We’ve really made an effort to curate this album to showcase the moments we think are really special.”

Here is the track listing for the ‘Stranger Things 3’ score album: 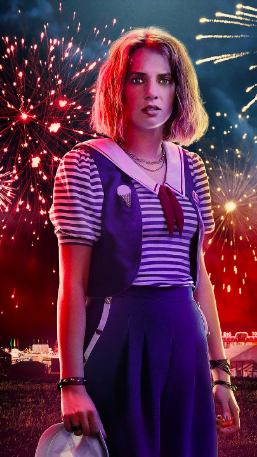 ‘Stranger Things 3—Original Score From the Netflix Original Series’ will be released digitally on June 28.  CD and vinyl releases are planned but not yet scheduled.

‘Stranger Things 3’ will be released in its entirety on Netflix on Thursday, July 4.  The next day will see the release of the pop compilation ‘Stranger Things: Soundtrack From the Netflix Original Series, Season 3’, which features 15 songs by Patsy Cline, “Weird Al” Yankovic, REO Speedwagon, John Mellencamp, and more.  That will be released on digital, CD and FYE-exclusive cassette on July 5, to be followed with a vinyl release on July 26.

Black Bolt “Will Never Have Dialogue” On ‘Inhumans,’ Per Marvel’s Head Of TV