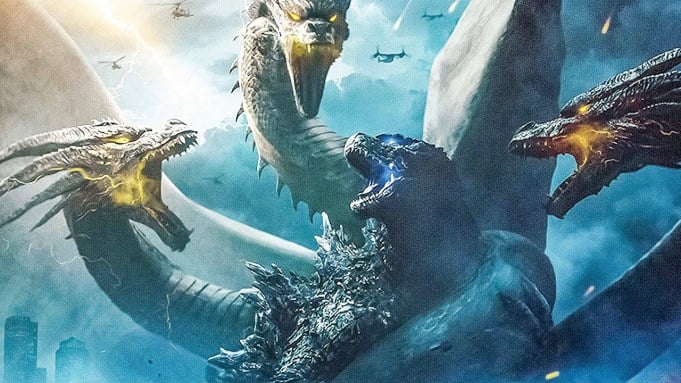 ‘Godzilla: King of the Monsters’ was eyed to open in the $60-$65 million range, based on strong presales, but once Friday night came, traffic died significantly, and by the end of the weekend, it ended up with only $49M.  For comparison, domestically, 2017’s ‘Kong: Skull Island’ overshot expectations to open with $61M, while 2014’s ‘Godzilla’ opened to a whopping $91M. A CGI extravaganza such as this is usually salvaged by the overseas market, but the picture isn’t playing well there either, with about $130M generated over the weekend.  Some had this pegged to open at upwards of $200M. It should be noted that Toho, the company that created ‘Godzilla’ has been steadily releasing Japanese-made ‘Godzilla’ flicks for years, so these American entries aren’t anything special and look to have been lost in the shuffle.  But it was the still #1 movie in the world, despite its lower-than-expected performance.

However– and I’ve never seen anything like this before– analysts believe these scores are biased.  Why?  Because of how rapidly business for ‘Godzilla: King of the Monsters’ dropped off.  It looks as though superfans rushed out to see it, loved it, and expressed those opinions to pollers upon leaving.  But non-superfans weren’t interested from the get-go and once those that wanted to see it did so on Thursday or Friday, that was it.  There was no more audience. Another issue may be reflected in the fact that this picture scored best with families with kids under 12.  It’s playing as a kids/family movie, instead of the four-quadrant tentpole it was meant to be.  That means its closest rival at the box office was ‘Aladdin’ which is still going strong.

As for those that didn’t bother, the reasons why include that ‘Godzilla’ is an old property that has been reinvented numerous times, so there was a “been there done that” feel to the whole thing.  In addition to 2014’s ‘Godzilla’ and ‘Kong: Skull Island’, there was also ‘Pacific Rim: Uprising’ and the rapidly waning ‘Transformers’ franchise.  Sure, those are robots, but the rampant destruction is the same.

Legendary declares that ‘Godzilla: King of the Monsters” production budget was about $170M, although some insiders report it was higher.  (Outside experts also believe that the $49M opening is inflated, and that the final number will be closer to $47M.)

‘Kong: Skull Island’ topped out at $600M worldwide.  ‘Godzilla: King of the Monsters’ will likely not hit that.  The next picture in this franchise, ‘Godzilla Vs. Kong’ has already wrapped, to be released next March.  But it seems doubtful that this series will continue beyond that.

One movie that doesn’t need saving is Disney’s ‘Aladdin’ which had a bigger-than-expected opening last week, and it held strong in its sophomore frame, earning $42.3M for second place.  That’s about half what it made last Fri-Sun, but it’s also only about $6M short of what ‘Godzilla’ made this weekend.

This is the first weekend this summer in which counterprogramming actually worked.  For starters, there is the older adult-skewing ‘Rocketman’, the biopic about the life of Elton John, starring Taron Egerton as the famously flamboyant pop icon.  With its restrictive R-rating, this picture was not expected to play as well as last fall’s ‘Bohemian Rhapsody’, which was rated PG-13 and opened in a less competitive market.  ‘Rocketman’ performed roughly as well as it was expected to, taking in $25M.  (‘BR’ opened to $50M.)  From audiences, it received an A- CinemaScore and 4 stars on PostTrak.  It has an excellent 90% on RT.

Another counterprogramming entry, horror movie ‘Ma’ came up a tad shy of its projection of about $20M, notching $18.2M, but with a dirt cheap $5M production budget, it’s already in the black.  One of ‘Ma’s strongest selling points is the fact that this is an original concept in the horror field; Octavia Spencer stars as an older woman who befriends a group of high school kids for whom she supplies alcohol and opens her home as a party pad, only to go slasher on them after they reject her.

In a strange turn-about, ‘Ma’ fared okay with critics, with 61% on RT, but audiences didn’t really like it, giving it a B- CinemaScore, and 2½ stars on PostTrak.

After a lackluster opening weekend, and poor audience reaction (2½ stars on PostTrak), horror movie ‘Brightburn’, plunged to #9, making only $2.4M in its sophomore weekend.  Most of that audience was lured away by ‘Ma’, but the negative word-of-mouth certainly didn’t help.

You will also notice that this is the first weekend that ‘Avengers: Endgame’ is not in the Top Five.  It has now accumulated $815.2M in the US and Canada.  Also slipping out was ‘Detective Pikachu’ which has made $130.6M domestically.

Next week sees the release of the oft-delayed X-Men movie ‘Dark Phoenix’, which essentially closes out the era of Fox ‘X-Movies’ that started back in 2000.  But tracking is bad, with this expected to be the poorest-performing movie in the franchise.  It’s actually not even expected to open at #1.

Tracking indicates that Illuminations’ latest animated movie ‘The Secret Life of Pets 2’ will come out on top.

In counterprogramming, there is the older female-targeted comedy ‘Late Night’, starring Mindy Kaling and Emma Thompson.  However, just weeks ago, two female-targeted comedies, ‘The Hustle’ and ‘Poms’, got shot down, so it’s unclear if that demographic will turn out for this one.